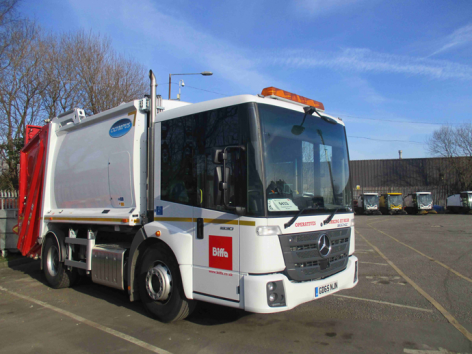 Biffa Municipal, which last year began an eight-year contract to provide household collections and street cleansing services for Manchester City Council, is investing £11m in a new vehicle fleet for the city, as well as a trial of the Cyclear safe cyclist system.

The 100-plus strong fleet will help improve operational efficiency and productivity, reduce transport costs, and be kinder to the environment and Biffa has already taken delivery of two Mercedes Econic 1830 18-tonne RCVs; nine Mercedes Econic 2630 26-tonne rear-steer RCVs; and three DAF LF 16-tonne RCVs, among others.

Nine of the 14 RCVs delivered to date, which are all Euro 6-compliant, are being prepared by Biffa engineers for a six-month trial to determine the best configuration that will optimise their performance. The preferred configurations will then be specified for the 30-plus RCVs making up the rest of the order.

Three different RCV bodies, from Dennis Eagle, Faun & Heil Farid, and two bin-lift systems (Terberg and Zoeller) will be evaluated to identify operational performance and costs, and supplier-related factors. Wear rates, warranty failures and response times will all be monitored and recorded, along with vehicle uptime and availability.

Engineers will analyse fuel economy, the number of bin lifts made, and vehicle payload for all waste streams, to help decide the optimum configuration of body and bin lift. Each vehicle configuration will work the same round so that the data is measurable, consistent and fair, and collection crews will regularly give feedback.

The 26-tonne RCVs feature a low entry cab, bus doors on the nearside for safe crew exit and entry, and safety curtains at the rear. As well as being fitted with a rear steer option to increase manoeuvrability and reduce tyre wear, they have also been adapted to accept a nearside-mounted slave carrier for a 140 litre container. Food waste will be decanted into this container during the round, and then tipped safely into the vehicle when required.

A further trial involves a RCV fitted with a 360o video camera (commonly used on many Biffa fleets elsewhere in the country) and the Cy-clear safe cyclist system. The trial will assess how effectively technology can help improve safety around the vehicle for both crew and other road users.

Mark Hodkinson, Biffa’s general manager for its Manchester contract, said: “We’re all working hard to get the fleet prepared for deployment on Manchester’s streets. While performing their normal duties, the larger RCVs will be providing valuable information about how they can best be used to deliver efficient and economical collection services.

“We’re also keen to get feedback on the safe cyclist system which we hope will be an important aid that gives our drivers greater visibility of all road users, particularly cyclists, at all times.”

Each RCV is expected to have a working life of around 10 years, during which time it will cover mileage equivalent to more than three times round the world (75,000+ miles). Depending on their schedule, they will collect around 120 tonnes of residual waste, 60 to 70 tonnes of recyclables or 100 plus tonnes of green waste each week from over half a million Manchester residents.

You can read more stories like this in MVO magazine, from CIWM, every quarter (next issue is due in May). Non-members of CIWM can apply for a free subscription to MVO magazine here