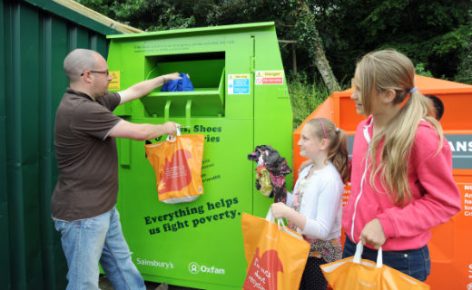 Brits are set to get rid of 680m pieces of clothing this season as they spring clean their wardrobes. 235m of which are expected to end in landfill, according to research by Sainsbury’s.

In total, three quarters (75%) of Britons admit they will throw clothes in the bin this spring, rather than donating or recycling items, meaning charities will be missing out to landfill.

On average people will dispose of 19 items with seven of those going straight in the bin.

The study also uncovered the reasons people don’t donate or recycle clothing, with half (49%) saying didn’t think they could because they were worn out or dirty. A further 16% admitted they don’t have time to visit a charity shop, or simply could not be bothered to sort items, while 6% of people didn’t realise clothing could be recycled.

“Many people still think that their unwanted clothes won’t make a difference to charities, but at Oxfam we can reuse or recycle almost anything.”

Interestingly, men are more likely to send clothes to landfill, with 82% saying they’ll bin items this spring, compared to 69% of women. Men will throw out more than the national average with 21 items being discarded, of which eight (38%) will end up in landfill. Women on the other hand average 17 items, of which six (35%) will go to landfill.

Paul Crewe, head of sustainability, energy, engineering & environment for Sainsbury’s, said: “If clothes go out with the rubbish, they’ll end up in landfill, so we’ve teamed up with Oxfam to help Britons become more charitable and environmentally savvy this spring. No matter if they’re worn out or grubby, we’re calling on shoppers to donate their unwanted clothes at recycling points in our stores across the UK – perfectly placed to fit into the nation’s everyday routine.”

Sainsbury’s is the biggest single supplier of second-hand clothing for Oxfam shops and, in the last year alone, the retailer has helped recycle over 16.3m garments, bringing in an estimated £3.6m for the charity.

Oxfam says that 100% of items donated via Sainsbury’s will be reused, resold or recycled, meaning that all items will be accepted regardless of style, condition or age. After being sorted at the charity’s ‘Wastesaver’ plant in Batley, Yorkshire, suitable items will be sold in Oxfam’s shops and online, or sent to support their social enterprise project in Senegal which creates jobs for disadvantaged women sorting and selling clothing in the local market. Items that aren’t fit for re-use can be turned into other textiles, used for the likes of insulation, sound proofing and padding.

Further findings also revealed that while half of respondents (47%) said their preferred way of getting rid of clothes was to take them to a charity shop, 15% said they’d normally throw items away in the rubbish. Again there’s a clear split between men and women, with a fifth (21%) of men favouring binning items, compared to half that (9%) amongst women.

Paul Crewe continued:“While recycling is now common-place for things like paper and plastics, it’s often overlooked when it comes to our clothes. But we’re trying to fix that and now have 340 donation points at our stores, so our customers can spruce their wardrobe in the knowledge that their old items will be making a difference elsewhere.”

Fee Gilfeather, head of retail brand for Oxfam, added: “Many people still think that their unwanted clothes won’t make a difference to charities, but at Oxfam we can reuse or recycle almost anything. The items donated through Sainsbury’s raise millions, helping us continue our vital work to end extreme poverty around the world.

“For example, right now Oxfam is responding to the food crisis in East Africa, where 16 million people are facing terrifying food shortages. Oxfam is providing safe clean water, sanitation and food. This is life-saving work and your unloved clothes really can make a huge difference.”

Sainsbury’s has Oxfam donation banks at 340 stores nationwide, allowing customers to drop off items while doing their shop. In the last year alone have seen a 15% increase in the number of clothes being donated. Last year more than 5,000 tonnes of clothing were donated through the partnership.