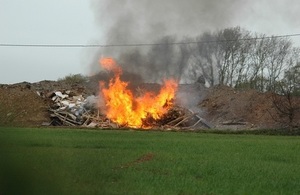 Employees of an Ashford-based waste management business have been fined a total of £25,419 for the illegal deposit and burning of large quantities of waste wood at Marlow Farm near Lenham and Tanglewood near Charing.

“In cases like this where illegal operations are connected with licensed businesses, we have no hesitation in prosecuting those involved as we want to make sure that waste crime doesn’t pay”

Following a complaint to Maidstone Borough Council in November 2012, Environment Agency officers inspected Marlow Farm and observed evidence that controlled waste had been burnt. Further investigations identified vehicles with Green Box livery depositing waste wood, with their drivers either setting fire to the waste themselves or allowing others to do so.

Richard Monks did not instruct or encourage any of the drivers to carry out the activities, but accepted that he knew that some loads of wood were being taken to Marlow Farm to be burnt. He chose to turn a blind eye to it and knowingly permitted up to 15 loads of waste wood to be deposited and burnt illegally at Marlow Farm. However, someone at Green Box instructed Andrew Malyan to deposit the wood waste illegally and he is now subject to a criminal conviction.

Green Box is a licensed waste transfer business located at Ashford Industrial Centre, Cobbs Wood in Ashford. The business accepts wastes, including waste wood, for sorting and treatment prior to being sent for lawful disposal or recycling elsewhere.

“In cases like this where illegal operations are connected with licensed businesses, we have no hesitation in prosecuting those involved as we want to make sure that waste crime doesn’t pay.”