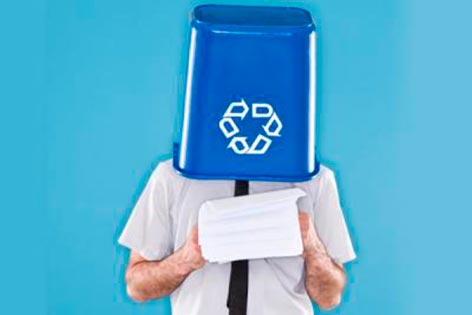 A study by recycling experts has found that 80 percent of businesses have not got the message on recycling and send most, if not all, of their rubbish to landfill.

According to the BusinessWaste.co.uk research, up to 80 percent of companies have no green policy in place and do not separate recyclable waste from non-recyclable.

The study found many companies don’t even sort paper, food and glass waste, despite the practice being widespread in domestic waste collections.

“It reflects very badly upon us as a nation,” said BusinessWaste.co.uk recycling manager Jonathan Ratcliffe. “Other countries have forged ahead with commercial recycling, but a high proportion of UK companies seemingly can’t be bothered and contribute to the 228m tonnes of waste we produce every year.

“Landfill is both wasteful and expensive,” said Jonathan, “and businesses are hitting themselves in the bank balance because of their inability or unwillingness to recycle. It’s not a great step implementing a green policy, and it saves money almost from the start.”

BusinessWaste.co.uk found that the most common things business are not recycling are:

The Business Waste survey also found that some companies are prepared to break the law in order to reduce or eliminate their waste-handling costs.

“We’re well aware that some companies will still fly-tip in this day-and-age,” said Jonathan, “but we’ve found some smaller businesses prepared to admit that they dispose of their waste at the household tip while posing as a member of the public.

“It’s a dangerous game – companies that breach their waste management duty of care face unlimited fines if they get caught.”

Fortunately, the government is incentivising green policies and recycling through tax breaks for energy efficiency, and the landfill tax, which penalises organisations that do no recycle their waste.

“At £72 per tonne going to landfill, it soon adds up for companies that don’t recycle,” said Jonathan.