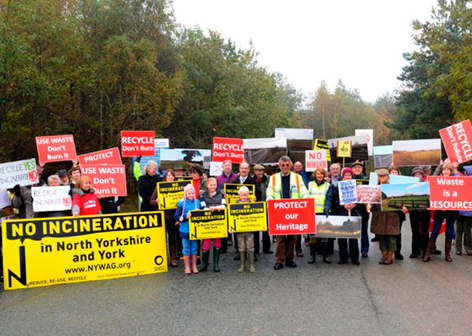 Opponents of a proposed £1.4bn energy from waste (EfW) facility in North Yorkshire have applied for a judicial review in an attempt to halt the plant’s planning process.

The Allerton Park facility was awarded an environmental permit earlier this month, despite being one of three projects to have PFI funding cut by Defra in February. The permit was issued by the Environment Agency (EA) following a public consultation and assessment of any potential impacts to the environment, in spite of a petition against the development that was signed by more than 10,000 people and supported by 40 town and parish councils.

Marton-cum-Grafton parish Council, who have been publically backed by the North Yorkshire Waste Action Group (NYWAG), are attempting to convince the administrative court in Leeds that a judicial review should be carried out with regard to North Yorkshire Council’s decision to approve the plant. Because the issue requires a speedy conclusion, Judge Mark Gosnell has been asked to consider a rolled-up hearing that will decide if a judicial review is necessary, but will also hear recommendations from interested parties should a review be considered appropriate.

A spokesperson for the NYWAG, Bob Schofield, said: “The Government’s withdrawal of PFI credits holes the incinerator plan but does not sink it, which is why we are looking to have the planning decision overturned through judicial review.”

The county council have moved quickly to deride the judicial review request, saying the parish council’s application is “unarguable and should be dismissed”.

Speaking as a representative of the county council, Nathalie Lieven QC, also notes that Defra’s decision to withdraw funding earlier this year was a complete surprise to everyone involved with the planning process. She said: “There was simply no rational or evidential basis upon which the council could have anticipated that the Government was contemplating withdrawing PFI credits.”

The Allerton Park EfW plant is expected to have the capacity to treat 320,000 tonnes of waste per year should it become operational, although a scheduled date for completion has yet to be announced.