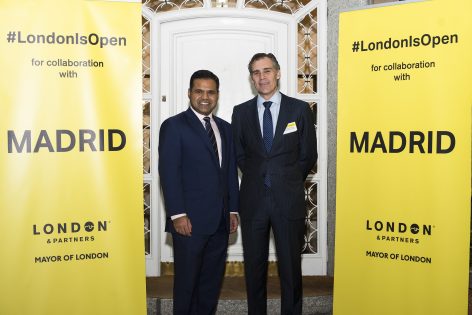 Amey has announced that it will support a Ferrovial Services partnership, comprising the Greater London Authority, University College London, Innovate UK and Future Cities Catapult, to transform the way public services are delivered in the capital.

The partnership’s flagship programme, titled Londoners’ Lab, will first look to tackle low recycling rates among people who live in the capital’s flats by conducting a survey to better understand their recycling habits and to design suitable technologies that will help them recycle more.

An impact analysis will follow and, if successful, will provide the business case and methodology for all local authorities across London to improve other public services, such as street cleaning and social care.

Santiago Olivares, Chief Executive Officer of Ferrovial Services, said: “London is a global leader in urban innovation; a forward-thinking city that is making great strides on key issues such as data-driven management, citizen engagement and the circular economy.

“We’re convinced that partnerships like Londoner’s Lab, which foster trust and collaboration between local government departments and service providers, are a key driver when it comes to improving the performance of cities and the experience they offer to residents and visitors alike.”

“We’re convinced that partnerships like Londoner’s Lab, which foster trust and collaboration between local government departments and service providers, are a key driver when it comes to improving the performance of cities and the experience they offer to residents and visitors alike.”

Shirley Rodrigues, Deputy London Mayor for the Environment and Energy, added, “Londoners’ Lab will help City Hall test new approaches to solving some of London’s biggest waste and recycling challenges. This will ensure that London establishes itself as a global leader on tackling climate change, while continuing to meet the needs of the capital’s growing population.”

Ferrovial Services’ Centre of Excellence for Cities will lead the partnership. UCL’s role will be to engage local residents in the survey and lead the design of the subsequent technological solution. Future Cities Catapult, meanwhile, will develop a business case for the process and develop material that local authorities can apply to future service procurements.

Scott Cain, Chief Business Officer at Future Cities Catapult, said: “Who knows most about recycling in a high-rise flat? Those of us who live in one. That’s the starting point for Londoners’ Lab and the development of new recycling services in London and beyond.”

Yvonne Rogers added, “Engaging local communities to come on board in co-design sessions is critical for the success of any kind of technology intervention intended to improve recycling rates.”

The partnership will look to build on London Mayor Sadiq Khan’s pledge to tackle falling recycling rates in the city and support the GLA’s target of a 65% recycling rate by 2030 and zero carbon city status for London by 2050.