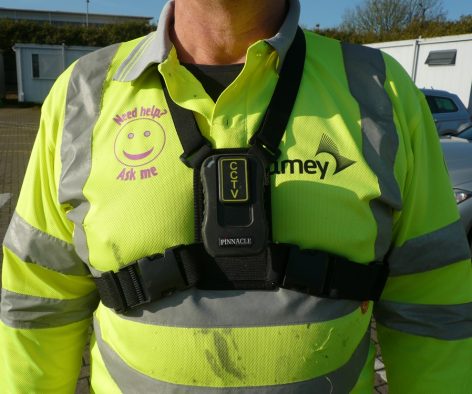 Amey’s environmental services teams will be given “wearable” technology in an attempt to combat fatigue, stress and sometimes even abuse from some members of the public.

Two pilot schemes will see one using the latest “wearable” technology to monitor the health and wellbeing of waste collection teams; the other, equipping employees at a recycling centre with “bodycams” that aim to discourage abusive behaviour from the public.

In the first project, 28 volunteers from Amey’s waste collection services in Wolverhampton have been wearing “smart” vests that monitor their heart rate, respiration, pace, posture and stress levels. The aim of this project has been to understand how the human body copes during different tasks in the working day.

“The results have given us great confidence that the delivery of environmental services contributes to a positive active lifestyle, although some areas of concern were also highlighted, which are now being addressed.”

Volunteers, who came from a range of roles, wore specially designed t-shirts with a “smart box” to capture physiological data, for an average of 10 work days each. At the end of each shift, the data was downloaded and a discussion held to understand if there were any events that could explain any fluctuation in the data exhibited. A detailed picture was built up of the health of each employee and their level of physical activity each day.

This has highlighted some positive aspects of their work, including the fact that all crew who took part in the study performed within acceptable cardiac activity levels.

There were, however, some areas of stress – for instance, when reversing a vehicle, working on uneven ground or in fast-moving traffic.

Amey says it is now reviewing the specifications of waste collection vehicles to include cameras and on-board systems to minimise the stress associated with reversing and encouraging crews to report where they have encountered uneven ground to the council using the City Council App. A healthy eating and lifestyle campaign directed at employees is also now under way.

Mark Saunders, UK Projects Director of Ferrovial Services’ Centre of Excellence for Cities, said: “The results have given us great confidence that the delivery of environmental services contributes to a positive active lifestyle, although some areas of concern were also highlighted, which are now being addressed.

“The teams and management were very receptive to trying out this technology. Without that, this project could not have been a success. I would like to thank them again for allowing us this opportunity to understand the dynamics of their work in greater detail.” 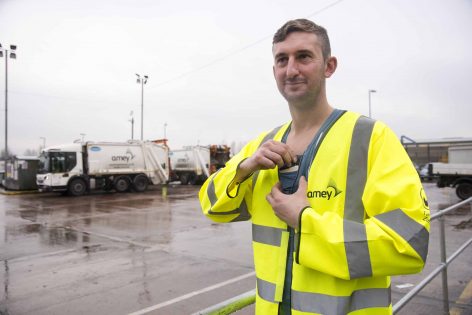 The second trial, which is under way at Amey’s Household Waste Recycling Centre in Northamptonshire, is taking place in response to what it calls a “worrying rise in verbal abuse to our employees” – in the past year it says they have seen a 26% increase in abuse and threats of violence at its HWRCs. The majority of these threats arise when people are told they cannot leave certain types or amounts of waste, and occasionally this even leads to our employees being assaulted, Amey says.

It is now trialling body camera technology that is attached over employees’ personal protective equipment (PPE). This provides clear video footage of the area in front of the employee, including audio recording. When activated by the wearer, it stores the previous 30 seconds ensuring any incidents are captured, including the events immediately prior to activation. Footage can be submitted to the police for further investigation and action if needed.

Amey’s Managing Director for Environmental Services Rob Edmondson said: “The safety of our employees is our top priority, which is why we’re looking at how we can change behaviours and protect our workforce from abuse. The main aim of this trial is to try and prevent incidents in the first place.

“By knowing they are on camera we believe customers will think twice about their behaviour. Already we’ve seen some success, with employees reporting they feel safer and customers being less aggressive when they become aware of the camera.”