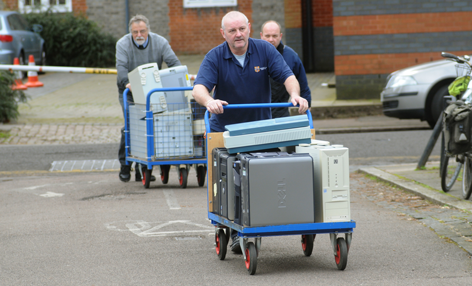 Cambridge has amasses a collection of 21.5 tonnes of e-waste for recycling, after a two day drive to encourage local people to clear out their unwanted or broken electrical items and recycle them.

Cambridge businesses, colleges, schools and residents brought along electronic waste to the electronic recycling event held on 06 and 07 March.

The same event, in March 2012, collected 37 tonnes of e-waste, and last year’s event collected 17 tonnes, which means that the three “spring clean” events have amassed 75.5 tonnes of broken or unwanted electronics for recycling.

More and more electronics are put on the market each year, but not nearly enough is recycled.

As an added incentive, everyone who contributed an item of e-waste for recycling had the opportunity to enter a free draw to win £250 worth of vouchers from a local bicycle store.

Jas Lally, Cambridge City Council – “This event was extremely successful and I’m glad that we were able to beat last year’s total.  I am pleased so many people were willing to recycle such a wide range of items and hope we can hold the event again next year”

The winner of the free draw was Janine Marcantonio from Hardwick, who commented: “I delivered a large and bulky CRT TV, and an upright vacuum cleaner.  It was great because I only had to open the boot and they were removed immediately by the friendly staff. It’s good to know about this service as I will definitely use it again!”

Nationwide Metal Recycling (NMR) Ltd provided the logistics for the event, supporting the public by unloading equipment from vehicles. All items will be treated in the UK to recover the metals and plastics, which they contain, and the recovered materials will be sent on to manufacturers and used to make new products. Recycling was provided courtesy of Apple.

Jas Lally, head of refuse and environment, Cambridge City Council, commented: “This event was extremely successful and I’m glad that we were able to beat last year’s total.  I am pleased so many people were willing to recycle such a wide range of items and hope we can hold the event again next year.

“It highlights just how much electrical waste we produce. It is important to remember that small electrical items can always be recycled at points across the city or larger items at the recycling centres near Milton or Thriplow.”