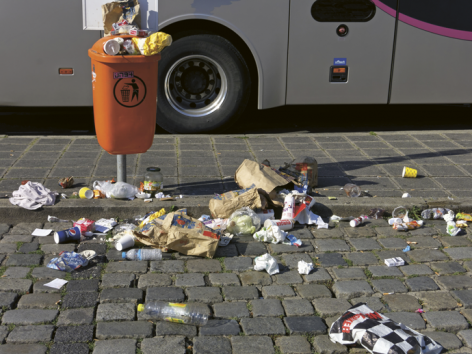 According to a new report published today by Keep Britain Tidy, the presence of large, brightly-coloured items of litter, such as crisp packets, bottles, take-away chicken and sandwich boxes – acts as a “beacon”, seemingly giving others the green light to drop their own rubbish.

The research is from Keep Britain Tidy’s Centre for Social Innovation, which also shows that keeping areas free from these “beacons of litter” reduces overall littering. and it builds on previous academic research, which has found that the presence of any type of litter attracts further littering because it signals to people that littering is socially acceptable in that area.

A “Beacons of Litter” social experiment was carried out, which involved cleaning three areas in two locations – Stourbridge in the West Midlands and Stoke Newington in north-east London – so that they were completely free of litter, then planting “beacon” items in one location, other smaller litter items, including tissues and small pieces of paper, in a second and leaving a third area litter-free as a control.

The sites were then monitored to see how people behaved and how much litter accumulated and the results were clear. The experiment was repeated six times over two weeks, with a total of 72 hours of observations monitoring taking place.

In the places where the “beacons” were present, the proportion of people who littered their rubbish, rather than disposing of it correctly, was 35 percent. In the areas where the smaller items were placed, that percentage fell to 22 percent and in the control, where no litter was placed, the percentage who littered was 17 percent.

The research also showed that people were more likely to drop “beacon” items if other “beacon” litter was already present.

When “beacons” litter was present or planted, 41 percent of people observed dropped drinks containers, plastic bags and other similar “beacon” items, but this fell to just 11 percent in the “other” condition and 10 percent in the control.

Keep Britain Tidy Chief Executive Allison Ogden-Newton said: “This research has important implications for those tasked with keep our country clean. If we can remove these ‘beacons of litter’ from the environment, there is evidence here to show that it could help reduce overall levels of littering and reduce costs.”

The research has also been published in the inaugural edition of KBT’s “Journal of Litter and Environmental Quality”, a new publication showcasing the latest research and case studies on the issue, which is available to download here.