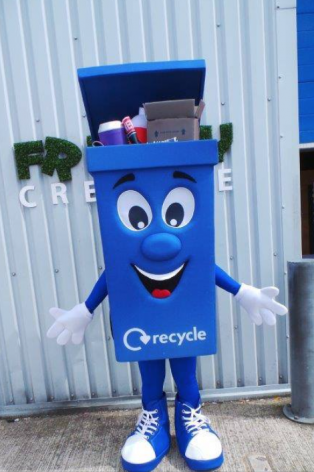 “Binny McBinface” has lost out to “Binbo Baggins” in a recycling mascot naming competition organised by Cherwell District Council.

Binbo Baggins, which won with 35% of the vote (while Binny McBinface came a strong second with 28%) will now tour district markets to star in “selfies” with members of the public.

Cllr Debbie Pickford, Cherwell’s lead member for clean and green, said: “The name the bin competition is a bit of playful summer fun, but it carries a serious message.

“We are knocking on doors as part of our recycling campaign but we also want to reach out to social media users to ensure our message reaches all sections of the community.

“People already do a good job of separating out their waste in north Oxfordshire but we are always looking to recycle more. We hope that the fun of having a recycling mascot competition will prove a great way of getting people to engage with our recycling team and think more about how they can help the environment by using our services.”

The competition is part of a wider drive which includes the delivery by a team of doorknockers of a ‘Right Stuff Right Bin’ leaflet, which answers frequently asked questions and lifts the lid on where materials such as plastic, paper and food waste end up after the bins are collected.