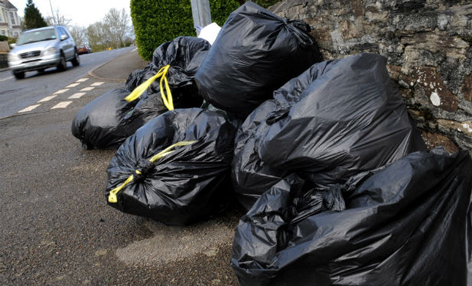 The introduction of a black bag limit in Swansea has helped prevent thousands of black bags ending up in landfill, Swansea council has announced.

Since the introduction of the three-bag limit in the city in April this year, Swansea Council, up to the end of August, has collected and disposed of 3,600 tonnes less black bag waste from the kerbside compared to the same period in 2013.

The Council brought in the limit to help reduce the amount of black bag waste being disposed of at landfill and to encourage residents to use the existing recycling services.

Mark Thomas, Cabinet Member for Environment & Transportation said: “Residents have been playing their part by sticking to the three bag limit and making use of the kerbside recycling services.

Cllr Mark Thomas – “We can’t become complacent about waste disposal. There is still much more to be done to comply with ever increasing targets and costs… We need all residents to do as much recycling as they can to help Swansea reach these targets”

“It’s great news to know that this has had a positive impact in terms of waste disposal in the city.”

Teams of door-knockers have also been visiting communities during the year to pass on advice to residents about recycling and get them involved.

Council’s in Wales need to achieve a recycling rate of 58 percent by 2016. In Swansea the recycling rate for 2013/14 was 52.8 percent and based on current recycling performance it is anticipated the rate will increase to around 56 percent for the following year.

Cllr Mark Thomas added: “We can’t become complacent about waste disposal. There is still much more to be done to comply with ever increasing targets and costs.

“We need all residents to do as much recycling as they can to help Swansea reach these targets.”

A CIWM Journal Online poll, taken in May this year, revealed that respondents are of the opinion that implementing a limit on the amount of black bag waste residents can put out for collection “makes sense” in reducing waste sent to landfill.

The CIWM Journal Online asked its readers to give their opinion on whether the move is an “effective way of reducing the amount of refuse sent to landfill?”

Findings revealed that 58 percent of respondents are of the opinion that it is an effective way of reducing waste sent to landfill, answering: “Yes, it makes sense, and evidence indicates this”.

Twenty-four percent of respondents, however, were of the reverse opinion, believing that not only does this type of scheme not work, but also it would only serve to “anger residents and increase flytipping.”

Eighteen percent of respondents believed that more time to observe behaviour around this needed.