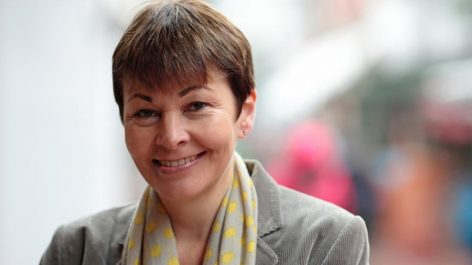 Caroline Lucas is set to stand for co-leadership of the Green Party with its work and pensions spokesman, Jonathan Bartley.

Under the slogan “The Power of Working Together”, Lucas says the pair aim to form a “progressive alliance” with other political parties, according to an article in the Guardian.

“I really think there is an appetite out there now for a less tribal politics,” she said.

Lucas – “I really think there is an appetite out there now for a less tribal politics.”

The party’s current leader, Natalie Bennett, announced in May that she is to step down from the role this summer, saying the party has been established as a national force, but that she was not a “spin-trained, lifelong politician”.

Lucas led the Green Party before Bennett took over in 2012. Lucas is the Party’s only MP, having been so for Brighton Pavilion since 2010. She said a share in the responsibilities of leader appealed because it would allow her to keep up with her job as a constituency MP and bring more voices into politics is a key part of the Greens’ platform

Bartley, who stood against Labour MP Chuka Umunna in the Streatham constituency in the 2015 general election, told the Guardian he believed Labour’s shift to the left under Jeremy Corbyn’s leadership had created a “once-in-a-generation opportunity to form a progressive alliance to bring people together, and actually change politics for a generation”.

The pair hope is to “professionalise” the party and establish a team of full-time campaigners who could help out in different constituencies at election times.