Novelis has announced its induction into the Circular Economy 100 (CE100), a global platform bringing together leading companies, emerging innovators, cities and regions to accelerate the transition to a circular economy.

An early adopter of circular economy principles, Novelis has increased the recycled content of its products from 33 percent to 50 percent since 2011, closing the loop on global aluminum production and consumption for society to use again and again, infinitely.

Novelis’ long-term goal is to achieve 80 percent recycled content, which will eliminate 10m tons of greenhouse gas (GHG) emissions from the global value chain and will cut the company’s overall GHG emissions in half compared to 2011 levels.

Casper Jorna, CE100 Business Program Lead, Ellen MacArthur Foundation – “This kind of circular business mindset, working towards designing waste out of the system, will ultimately make the circular economy vision a reality, and we’re relying on collaborations with forward-looking companies like Novelis to accelerate this transition”

As part of its membership in the CE100, Novelis will play an active role in advising and collaborating with members on circular economy initiatives and serve as a leader and representative of circular economy practices, in addition to supporting the CE100’s research and education-based initiatives.

“Novelis is actively putting the principles of the circular economy into practice,” said Casper Jorna, CE100 Business Program Lead, Ellen MacArthur Foundation. “This kind of circular business mindset, working towards designing waste out of the system, will ultimately make the circular economy vision a reality, and we’re relying on collaborations with forward-looking companies like Novelis to accelerate this transition.” 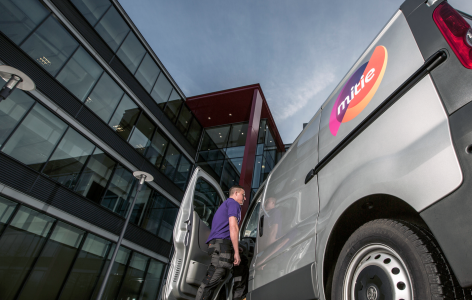 Mitie, the facilities management company that delivers a range of services across the UK, this morning announced its results for the six months ended 30 September 2014.

The FTSE 250 company’s headline results reflect strong revenue and earnings growth, with revenues up 5.8% to £2,266.2m, plus sector-leading organic growth of 6.1% in FM. Operating profit before other items increased by 0.9% to £128.6m.

Ruby McGregor-Smith CBE, chief executive of Mitie – “Mitie has made good progress this year. We have re-positioned the business and lowered our risk profile”

In this period Mitie, who employs about 70,000 people across the United Kingdom and Europe, was awarded new contracts, which include:

Ruby McGregor-Smith CBE, chief executive of Mitie, commented: “Mitie has made good progress this year. We have re-positioned the business and lowered our risk profile. Our Facilities Management business accounts for c.85% of group revenue and is a UK market leader.

“We see considerable opportunities across our markets, to provide clients with higher quality, innovative services that save them money. We also see this as a positive environment in which to start and grow new businesses, and we plan to back entrepreneurs to do this through our £20m ‘Mitie Model’ entrepreneurial fund.”

JCB achieved underlying earnings in excess of £300m for the fourth successive year, as improvements in Western economies were eclipsed by sharp falls in developing construction equipment markets.

JCB Chairman Lord Bamford said: “For different reasons each of the ‘BRIC’ markets of Brazil, Russia, India and China were sharply down in 2014. However, the broad spread of our business enabled us to benefit from better conditions in North America, Western Europe and particularly the UK.”

Lord Bamford added: “Global market uncertainty has continued into 2015, though our home market of the UK remains a rare bright spot.  The need for infrastructure in much of the developing world remains acute and will eventually drive a resumption of growth. Our resilient performance in 2014 demonstrates we are well placed to capitalise on improving trends as they emerge.”

Since 2010, JCB has created 2,000 new jobs at its 11 UK plants, boosting employment levels to 6,000. Globally, the company now employs 12,500 people. JCB is currently investing in UK manufacturing by increasing production capacity at its World HQ in Rocester, Staffs. The company also completed a 700,000 sq ft factory development in Jaipur, India in 2014 costing £62 million and construction of a new €25m HQ for JCB Germany is also underway.