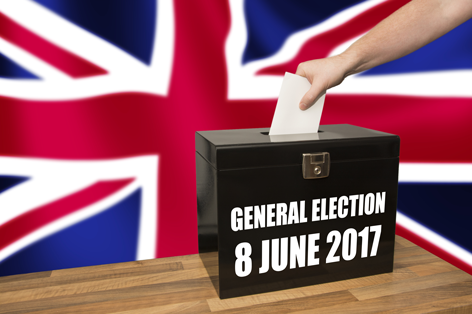 The environment and sustainability profession has criticised the low level of attention placed on crucial climate, resource and energy concerns during the general election campaign, according to an online poll conducted by the Institute of Environmental Management & Assessment (IEMA).

As part of an online survey of 618 UK environment and sustainability experts, conducted over the past week ahead of the general election on 8 June, 90% said they were either extremely or somewhat unhappy with the prominence of critical issues such as climate change, resource management, renewable energy and pollution throughout the short but intense campaign.

90% also rated the quality of national debate about tackling the UK’s air pollution as poor.

The co-leadership of Caroline Lucas/Jonathan Barltey of the Green Party was voted strongest on environmental issues, by 57% of those surveyed. Labour Leader Jeremy Corbyn came second with 9%, and Conservative Prime Minister Theresa May gained 6% of the vote.

Of the 18% who said they don’t know, over a third (39%) said while they think some Leaders are stronger than others, they doubt their ability or commitment to deliver change.

93% of IEMA’s members said they agree that the next Government must strengthen its commitment and investment on future climate risks such as flood risk management.

Martin Baxter, IEMA’s Chief Policy Advisor, said this response from the profession should be seen as an opportunity for the next Government to better align economic and environmental goals.

“It’s clear that Party leaders have largely failed to acknowledge critical environmental issues that can and will impact on the economy and society,” he said. “[This week] a new Government will be elected and, regardless of who is at the helm, it is vital that they take on board the profession’s views and engage with them to accelerate the transition to a sustainable economy.”

Further findings from the survey revealed:

IEMA is the membership body for more than 14,000 environment and sustainability professionals worldwide.