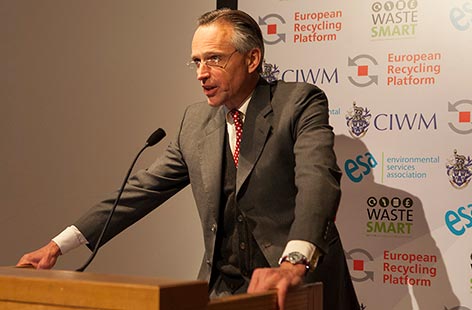 Resource minister Lord de Mauley spoke at day one of the CIWM Conference in partnership with ESA 2013, saying that Government must set conditions for change.

He said: “The most significant part of Government’s strategy must be setting the conditions that allow the market, businesses, local authorities and individual people to make the changes that will propel us towards the long-term vision.”

The conference began with an address from CIWM President John Skidmore, who launched the CIWM Health, Safety and Welfare Pledge (www.ciwm.co.uk/pledge) to support the industry’s considerable push for improved health and safety standards for those working in waste and recycling.

He also launched the new CIWM Journal website which will be a hub for up-to-date waste and resource news, and will also offer an added membership benefit of providing an online version of the previous month’s journal.

Professor Paul Ekins (pictured below), director of the UCL Institute for Sustainable Resources Professor, provided the day’s opening keynote speech, and spoke about the need to move to a model where the economic outcome is not the only priority. 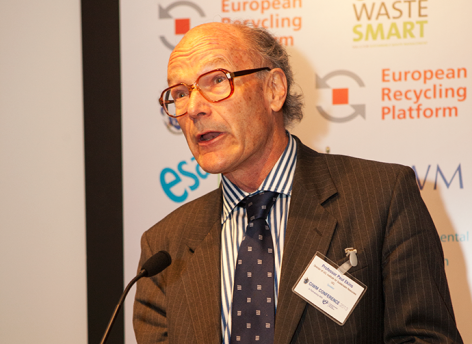 He praised the efforts that have been made within the industry in the last couple of decades and also said that pay as you throw remains, in his opinion, the most direct route to push progress on waste prevention.

The opening Question Time debate, chaired by ESA chairman David Palmer-Jones, went on to discuss what steps will be required to build a viable circular economy. Palmer-Jones said that the circular economy is now impossible to ignore and said that “we can no longer design products without first thinking of the way they can be dismantled.”

Sally Uren, deputy CEO of the Forum for the Future, said that one of the main challenges ahead will be the implementation of a “robust sustainability framework, so as to avoid unexpected consequences in the future.”

This point was given further credence by head of zero waste policy at Scottish Government Stuart Greig, who said: “Over the next 12 months we need to unpick the economy to see who will benefit from this shift.”

Phil Conran, 360 Environmental – “There is little evidence that there has been much change in environmental design”

Director of 360 Environmental Ltd Phil Conran analysed the performance to date of Producer Responsibility legislation and said that while it has driven positive change in some areas it is not a perfect instrument and there is “little evidence that there has been much change in environmental design.”

Opening the afternoon session, Lord de Mauley outlined his ambitions for the future of waste and recycling. He said: “We all need to improve our understanding of how to prevent waste, and the recent call for evidence should help us greatly with that. We must also help the public to maximise reuse and recycling, and ensure that avoiding contamination is much easier.”

He also responded to the day’s circular economy theme, saying: “I believe there is a real opportunity to drive growth and improve the environment in a more circular economy. Everyone – governments, industry, communities and civil society organisations – has a stake in making this happen and I am confident that people want to do the right thing. It is a question of making it easy for them, and of setting the conditions to allow the market, businesses and people to effect the change necessary.”

Rob Holdway, Giraffe Innovation – “We still haven’t engaged enough with businesses or consumers on sustainability… 80 percent of environmental impacts, and therefore costs, are determined at the early stages of design”

The next topic for discussion was what imperatives were necessary in order to deliver real progress on waste prevention.

Director of Giraffe Innovation Ltd Rob Holdway said there is more to do on communication. “We still haven’t engaged enough with businesses or consumers on sustainability. We must ensure that competent design is key; there is an old adage that claims 80 percent of environmental impacts, and therefore costs, are determined at the early stages of design.”

The day’s final session looked at the current hot topic of food waste. Chair of the Visionary Panel on Food Waste Lord Deben said that we can’t ignore food waste any longer – and called for two critical actions: banning food waste to landfill and ensuring that all local authorities introduce separated food collections. Richard Swannell reminded delegates that we have made progress and that the UK is on course to cut food waste by 20 percent by 2015.

Chief executive of the Hospitality Institute Peter Ducker noted that one in six of all meals served in the UK come from the hospitality sector, putting restaurants and hotels right at the heart of changing consumer behaviour.

Today, day two of the conference will see Shadow Secretary of State Mary Creagh speaking, as well as sessions on energy, public perception and communications, and the future waste policy landscape.