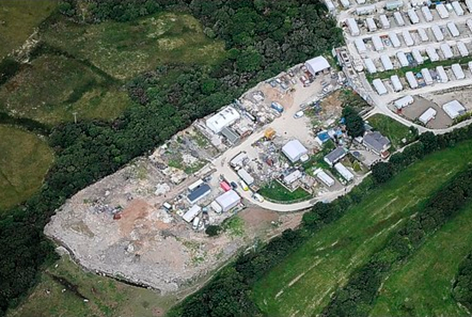 Eight members of the Bugle family have been ordered to pay almost half a million pounds after being found guilty of running an illegal waste dumping operation in Bugle, Cornwall.

The family had previously admitted to running a series of illegal waste operations and was ordered to pay a total of £457,209 in fines, prosecution costs and confiscation orders, at Truro Crown Court on Monday (20 Jan).

Mother Shirley Buckland appeared alongside her sons Leeroy, Jason, Shane and Karl Buckland, her daughter-in-law Roseanne and her son-in-law James Crocker and his brother Paul.

The Court heard that between 2003 and 2011 several thousand tonnes of material was dumped on land at the site after it was turned into an illegal waste transfer station and landfill. Waste was also burnt, sorted and recycled, in what was described as waste transfer activity.

Skips were used to bring waste, including soil, wood and metal for recycling or disposal by landfill on the former smallholding.

The family had no planning permission or necessary permits from the Environment Agency.

Numerous meetings between the family and the Environment Agency had occurred but the warnings were ignored, the prosecution said

On June 30, 2011, police raided the site in a joint operation with the Environment Agency.

The family also had around 50 caravans on the site that are let out and which they receive housing benefit for.

Shirley Buckland pleaded guilty to causing a ground water activity in relation to the site, which the court heard did not have a suitable sewage system.