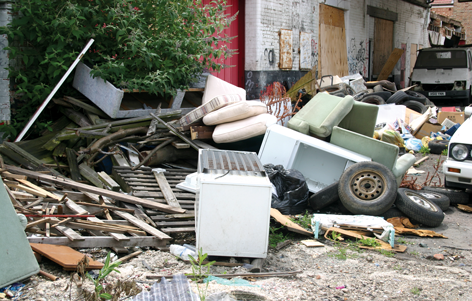 New powers are being called for by councils to tackle fly-tippers who make “residents’ lives hell” and cost taxpayers millions of pounds, according to the Local Government Association (LGA).

The LGA, which represents almost 400 councils in England and Wales, says the system for tackling unscrupulous fly-tippers is unfit for purpose.

Local authorities tackle almost three-quarters of a million (711,000) annual fly-tipping incidents, costing over £36m – which is the on average equal to the cost of collection of waste and recycling for over half a million homes per year.

Councils say they are now seeing some of the worst cases of fly-tipping ever.

According to the LGA, Stoke-on-Trent council is fielding 400 complaints a month combating piles of dumped items like abandoned tyres, cars and even baths, and Derby City Council is setting up a special night-time “enforcement team” to tackle the tippers.

Currently, councils can only take fly-tippers to court and this can be expensive, and time-consuming – frequently involving lengthy investigations. Often councils are left out of pocket because courts only award partial costs. This is because they often take into account the financial circumstances of the defendant and will also regard compensation as a higher priority than prosecution costs if a defendant has limited means.

The LGA says that it wants councils to be awarded “full costs” and, have the flexibility of issuing on-the-spot Fixed Penalty Notices (FPNs), for some cases, rather than having to go to court, which is expensive and can take months.

FPNs would be handed out for offences likes dumping items, such as pieces of broken furniture, old televisions and mattresses.

“Councils use enforcement powers proportionately and use a raft of different approaches to raise awareness and change culture,” The LGA states. “This includes providing advice and encouraging residents to report incidents and businesses to keep areas adjacent to their premises clean and clear of litter and mess that can attract dumping.”

Cllr Peter Box, the LGA’s environment spokesman said: “It is utterly unacceptable and inexcusable for anyone to dump waste illegally and councils know how much people hate seeing this sort of vandalism on their doorsteps.

“Chasing down the culprits and clearing up their mess costs taxpayers tens of millions of pounds every year. Currently councils can only take fly-tippers to court rather than issuing a fine – when sometimes this is a more appropriate response – and in many cases they are unable to reclaim the full costs.

“Local authorities are remarkably effective and efficient in tackling fly-tipping but the current system works against them. We need a new streamlined system, which helps councils and hurts those doing the dumping, one that is nimble, flexible and effective.

“All the figures show that the huge amount of effort local authorities put into preventing and tackling fly-tipping is having a real impact – but new powers would ensure it goes even further. Not only does fly-tipping create an eyesore for residents, it is also a serious public health risk, creating pollution and attracting rats and other vermin.”