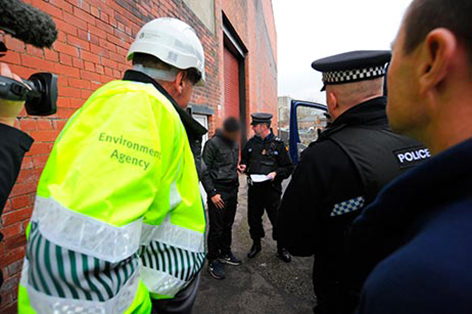 Environmental Agency officers launched a raid against a recycling firm suspected of breaking rules about spreading waste on the land.

According to the Hull Daily Mail, fifteen Environment Agency officers and 15 police officers took part in the early-morning operation, which resulted in two men being arrested at Holme-on-Spalding Moor.

An Environment Agency spokesman said: “The raids were part of an operation investigating into the composing and land spreading industry in the Yorkshire area.”

Material classed as compost, rather than waste, has to meet a set British Standard. Anyone who spreads waste on land is required to have a permit under the Environmental Permitting Regulations.

Once a permit has been granted for any site, applicants have to submit a deployment form, which provides specific details about the land they intend to spread to and what they are spreading on.

Environment Agency teams conducted the searches of the premises and are analysing the evidence gathered.

The Environment Agency said: “Our Environmental Crime Team is investigating the land spreading industry in Yorkshire and will continue to target those who risk damaging our heath, the environment and the livelihoods of legitimate operators.

“We take waste crime extremely seriously. We are continuing our inquiries.”

CIWM President, John Skidmore commented on the story, saying that he supports the action on being tough with those that break the law.