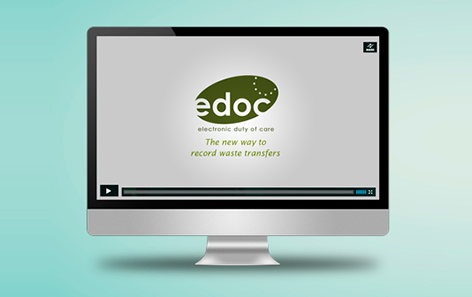 A free online system that will save UK businesses time and money by transforming the way they record the waste they produce is launched today in a partnership of waste industry and government bodies, including CIWM.

Electronic duty of care – or “edoc” – is expected to save organisations across the country a combined total of £8m a year by providing a modern electronic alternative to burdensome paperwork.

All UK businesses are required to produce waste transfer notes, which describe their waste and who they pass it on to.

edoc aims to replace the current paper-based system, which requires around 50m waste transfer notes to be stored in filing cabinets across the UK. These need to be kept for a minimum of two years – and around 23m are produced every year.

Steve Lee, CIWM – “We have supported the whole production process of edoc and we are confident that it will allow businesses across the UK to carry out a wide range of tasks which will help to modernise and streamline waste transfer recordings in the future”

The system will help businesses keep on top of their waste transfer notes by sending email alerts to users when they need to review, edit or sign one off. As well as the online portal, edoc has been built to enable businesses to link it with their existing waste management systems directly.

The data being collected will also enable national governments to build a comprehensive view of the waste being produced by UK businesses, saving a potential £1m a year of public money spent on business waste surveys.

Project partners are urging every UK business that produces or handles business waste to adopt the online option.

edoc comes at a time when the government is focused on to improving outdated, burdensome or over-complicated regulations. In a set of major announcements on Red Tape Challenge outcomes headed by Prime Minister David Cameron this week, Ministers have highlighted edoc’s potential to replace 23m of paper waste transfer notes a year.

Chris Deed, edoc programme manager at the Environment Agency, said: “We estimate that UK businesses currently create some 23m waste transfer notes every year. With the legal requirement to keep documentary evidence for at least two years, that’s potentially 50m pieces of paper in storage somewhere across the country at any one time. We’re really encouraged by the response we’ve had to edoc so far.

“It’s not a mandatory system, but the level of interest shows that businesses want to use it. We believe edoc will become the default option for most companies, and has the potential to move 80 percent of waste transfer records online over time.”

Steve Lee, chief executive of CIWM, said: “We have supported the whole production process of edoc and we are confident that it will allow businesses across the UK to carry out a wide range of tasks which will help to modernise and streamline waste transfer recordings in the future.

“As well as saving time and money on administration, edoc has a far bigger and more important role to play in the long term. It will give businesses the ability to understand and interrogate their own waste data and identify opportunities to improve resource efficiency, reduce waste and cut disposal costs. These are benefits that will impact positively on the bottom line and improve competitiveness.”

edoc is available at www.edoconline.co.uk.