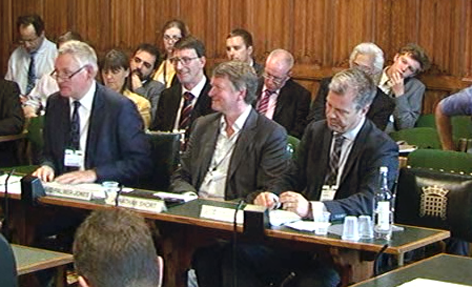 Government cuts mean that England risks missing its EU recycling targets, the founder of one of the UK’s leading recycling companies warns.

Jonathan Short (pictured centre), the founder of plastics recycling company ECO Plastics, who appeared in front of the House of Commons Environment, Food and Rural Affairs (Efra) Select Committee inquiry yesterday (25 June), says that Government cuts have led to the Defra to pull back from making urgently needed policy reforms, just at the point when they are needed the most.

England’s progress towards the EU target of recycling 50 percent of household waste has slowed significantly, rising just 0.1 percent in the 12 months to June 2013 to reach 43.3 percent.

At the same time, figures from WRAP, the Government funded body set-up to reduce the amount of waste sent to landfill, show that only 19 percent of the 600m tonnes of total products and materials entering the UK economy each year are recycled, creating a significant opportunity for higher recycling rates.

“At the end of last year, the Government announced it was no longer going to focus on reforming policy due to funding cuts, just at the point when the recycling sector needs it the most,” says Jonathan Short.

“That needs to change, if we are serious about hitting our recycling targets. We need fundamental changes to the regulatory system, a dedicated educational campaign for consumers and a mandate for manufacturers to use recycled products, if we are to maximise our recycling capability in the UK and establish a truly circular economy.”

Short believes the Government should take action in three ways in order to drive successful change.

Jonathan Short – “At the end of last year, the Government announced it was no longer going to focus on reforming policy due to funding cuts, just at the point when the recycling sector needs it the most”.

Secondly, Government needs to put recycling – and the creation of a sustainable, circular economy – at the centre of economic policy. Growing the recycling sector to deliver a circular economy not only retains the economic value of resource waste here in the UK. It also helps develop an economy that is self-sufficient and secure.

However, departmental cuts have meant that the Government has pulled back on the recycling and waste resource policy agenda – just at the point when it needs to be doing more to create a sector that is sustainable economically as well as environmentally.

Finally, the Founder of ECO Plastics believes that the Government should do more to make it easier for households to recycle resource waste by using the controversial plastic bag tax to fund a nationwide public awareness campaign.

Jonathan Short says: “The Government could finance a campaign using the VAT revenue collected by central Government as part of the Single-Use Plastic Bag Charge. The Government will collect almost £20m a year from the VAT element of the charge. Even a fraction of that revenue would be sufficient for an effective campaign which ECO Plastics estimates would encourage a further £50m of plastic bottles collected per year and deliver a saving in landfill tax alone of £20m a year.”