A tradesman has been fined £1,000 after council workers found a receipt with his details in a pile of waste dumped near a village in South Northamptonshire.

On Tuesday, 29 March, builder and electrician, John Murphy, 18, of Laytons Lane, Sunbury-on-Thames appeared at Northampton Magistrates’ Court and pleaded guilty to fly-tipping the waste on a grass verge near Puxley.

Four days after it was reported by a member of the public, workers from South Northamptonshire Council (SNC) were sent to clean up the mess at the taxpayers’ expense.

One eagled-eyed worker spotted a receipt from a builders’ merchant with Murphy’s address on it and he was invited to an interview under caution at the SNC offices in Towcester.

There he admitted to SNC enforcement officers that he had left the waste after carrying out some work in the area, but planned to return at a later date to remove it.

Andigestion Cleans Up At The Cheltenham Festival 2016

Bishops-Cleeve based Andigestion Ltd put in a winning service at the Cheltenham races this year taking care of all The Festival food waste during a record turnout.

These were distributed across the main catering areas including The Princess Royal Stand, main kitchen and the tented village. Over 80 branded caddies were also positioned in the VIP boxes.

Jamie-Lee, WCRS (Waste Cost Reduction Services) Ltd, said: “This was always going to be a pivotal year for The Cheltenham Festival and we had a record turnout of over 260,000 people.

“The full bins were efficiently swapped for clean, fresh empty ones and a quality service was maintained every day of The Festival despite the strict time limits they had to deal with when vehicles were allowed on and off the site. The service provided by Andigestion during The Festival was gold standard!”

Jason Ward, Commercial Manager, Andigestion said: “Andigestion were really put to the test but it was a huge success all round. The waste collected was a combination of food preparation waste, plate scrapings and leftovers.

“For maximum efficiency many of the bins were located in and around kitchen areas to capture scraps at the source. Our food waste bins are steam cleaned between each use, meaning that we can ensure they are safe and hygienic for use around the kitchen.

“Although 450 bins worth seems like a tremendous amount, with over a quarter of a million visitors attending this year’s Festival it was a positive outcome that the waste was being put to good use, creating renewable energy rather than just being sent to landfill.” 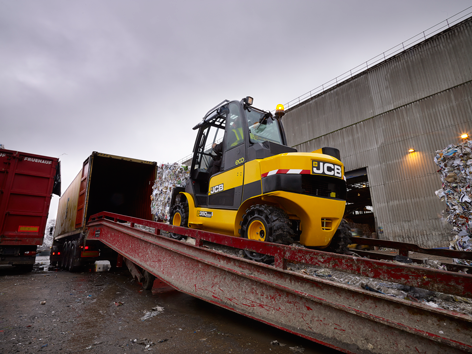 The Teletruk has a range of new safety features, and has been manufactured with a real focus on operator protection and improved visibility.

The FLTA said: “Safety remains at the top of the Fork Lift Truck Association’s agenda and JCB is an excellent example of the strides made by manufacturers to make their products safer and help reduce accidents and resulting injuries.”

JCB Industrial General Manager Nicola Bagworth, said: “We are delighted to have won this award and would like to thank everyone who voted for the Teletruk. We work closely with our customers to ensure we meet their needs, and the safety of machine operators and any nearby pedestrians is a key concern. This award is a great achievement, but our work goes on. We will continue to innovate and develop machines that drive the industry forward in a safe and cost effective way.”

The JCB Teletruk’s telescopic boom offers a number of benefits over conventional forklifts. Even in confined spaces a Teletruk can reach forwards to lift and place loads quickly and safely.

As well as the machine’s safety features, its forward reach means curtain-sided vehicles only need to be opened from one side, forklift operations and pedestrians are kept apart. The time and space saving capability of the JCB Teletruk make it an ideal materials handler for the waste and recycling industry.