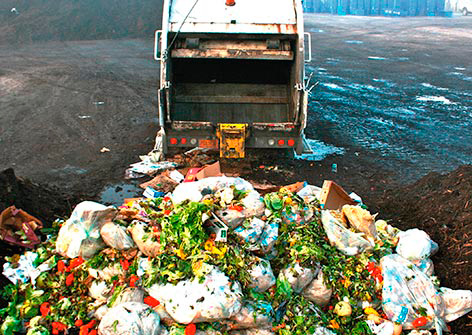 Food waste should not be left to rot in landfill sites, says ReFood, after revealing that the hospitality sector is set to spend £32m pounds this year sending food waste to landfill, after landfill tax increased by £8 per tonne on 1 April 2014.

Each year, the UK’s 260,000 catering and hospitality outlets produce around 4m tonnes of food waste, according to ReFood, which is costly to dispose of.

ReFood states that through improved planning, portioning, management, storage and preparation almost two thirds of the waste produced could instead be sold and eaten.

Hospitality outlets can also make further savings by separating food waste for recycling. It is estimated by ReFood that recycling food waste can be as much as 45 percent cheaper than sending it to landfill.

Philip Simpson, ReFood – “Food waste is a valuable resource and one we shouldn’t be leaving to rot in landfill sites. With annual rises in landfill tax, separating food waste for recycling makes sound and long term economic, as well as environmental sense”

Philip Simpson, commercial director at ReFood, said: “Food waste is a valuable resource and one we shouldn’t be leaving to rot in landfill sites. With annual rises in landfill tax, separating food waste for recycling makes sound and long term economic, as well as environmental sense.”

Separating out food waste also helps hospitality businesses understand and measure exactly what types of food waste are being generated and in what quantities and take steps to prevent waste arising in the first place.

As of 2014, legislation in Scotland now requires hospitality businesses producing more than 50kg of food waste per week to separate it for recycling and similar policies are planned in Wales and Northern Ireland. The industry is also campaigning for similar policies to come into force in England.

ReFood recently launched its Vision 2020; UK roadmap to zero food waste to landfill by 2020 which aimed to set the wheels in motion as to how the UK’s food chain can encourage behavioural change and achieve the goal of eradicating food waste from landfill.

The report highlights best practice examples from across the sector. For example, Unilever Food Solutions has reported numerous successes. Among these, Kings Valley Hotel in Ireland has saved seven percent on its purchase of food, while Frimley Hall Hotel identified that garnishes were largely uneaten and saved £100 per month by removing them from plates altogether.

Simpson added: “Achieving zero food waste to landfill is a big challenge but it is an achievable one. By focusing on sustainable sourcing, measures to prevent waste, as well as how to employ best practice in dealing with the waste that is produced, the hospitality industry can avoid the considerable costs associated with landfill and we can ensure that sustainability is built into the heart of the sector for years to come.”