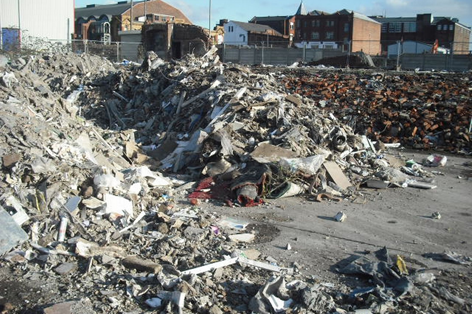 A former male stripper and Chippendale has been prosecuted for running an illegal waste site in Manchester, bankrolled by the late Manchester boxing promoter and bare-knuckle fighter Wayne Barker, who died in 2012 while investigations were ongoing.

Refuse was dumped on the £2.7m former Lancashire Dairies site, the Manchester Evening News revealed, and Green Waste Reclamation Ltd continued to take in waste for seven months after the Environment Agency first warned that operations must stop.

At the time of Environment Agency intervention the site was the cause of a major fly infestation to the area and waste leachate threatened to seep into the ground, killing wildlife and poisoning the water supply.

The unlicensed site cost the landowners £250,000 to clear, which contained 12,000 cubic metres of waste.

Green became involved with day-to-day running of the illegal site after Barker employed him as a “bodyguard”.

He told the court he believed the operation was “totally legal” when he was recruited, saying was “shocked” to face prosecution.

A spokesman for the Environment Agency said: “The waste was made up of the dirtiest and smelliest household rubbish you can think of – the kind of thing left in your own bin bag after you’ve removed everything you can recycle.

“The waste attracted flies and enormous rats and smelt worse the longer it was there.

“Had our investigating officers not acted when they did the site could have been filled to the brim and the resulting clear-up costs could have fallen to the taxpayer.”

Green pleaded guilty to operating a waste site without a permit and was given an eight-month suspended jail sentence, plus 200 hours of unpaid work and a £3,000 fine.

The judge said: “Illegal dumping can and frequently does result in great harm to the environment and ultimately people… I accept you were a smaller player, however surveillance shows you were deeply involved. You knew that sort of material could never properly be dumped in the centre of a city.”