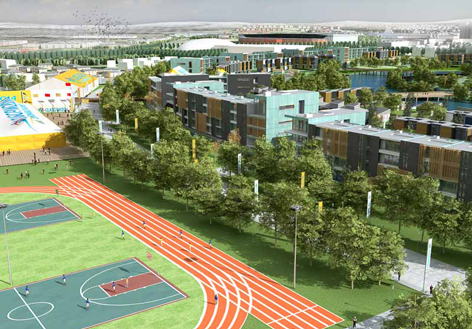 Food and garden waste collected from households in Glasgow City, East Renfrewshire and South Lanarkshire Councils has been transformed into compost, which was used in the development of Glasgow 2014’s Athletes Village and other Commonwealth Games venues.

Almost 50,000 tonnes of food and garden waste is collected from the council areas each year and sent to GP Plantscape’s In-Vessel Composting (IVC) facility in Blantyre.

Here it is recycled into rich compost, which is used in a number of different ways, including in the construction of Glasgow 2014’s Athletes Village in Dalmarnock.

Compostable garden waste has been made into the turf to be used by the competing athletes.

As well as using compost during the construction of the Athletes Village, the village has been designed to be energy efficient with photovoltaic panels on the houses and a combined heat and power system.

Glasgow 2014 has made a commitment to be a truly sustainable Commonwealth Games, aiming to minimise the amount of waste sent to landfill throughout the event, with a diversion target of 80 percent and a commitment to recycle as much as possible.

Iain Gulland, Zero Waste Scotland – “The Glasgow 2014 Commonwealth Games is a great opportunity for Scotland to host a truly sustainable green event, projecting a lasting legacy to be proud of, and as such it’s great to see this valuable material being used in such as efficient way”

Iain Gulland, Director, Zero Waste Scotland said: “Scottish householders dispose of over half a million tonnes of food and drink each year.  When sent to landfill this food decomposes and releases harmful greenhouse gases.

“Around 57 per cent of households in Scotland now have access to a food waste recycling service, allowing this waste to be transformed into a valuable resource, as we can see from its use at the Athletes Village.

“The Glasgow 2014 Commonwealth Games is a great opportunity for Scotland to host a truly sustainable green event, projecting a lasting legacy to be proud of, and as such it’s great to see this valuable material being used in such as efficient way.”

Glasgow 2014 Environment and Sustainability Manager Gareth Talbot said: “The Glasgow 2014 Commonwealth Games is aiming to be a truly sustainable event, rooted in Scotland. To be able to use household food waste, collected and responsibly recycled by householders all across the west of Scotland, and turn that via composting into the very turf on which athletes will be staying and competing at these very special games, is a great example of the way we’ve embedded sustainability in the Games’ organisation.”

Councillor Hamish Stewart, Chair of South Lanarkshire Council’s Community Resources Committee commented: “This is an excellent way of using our compostable garden waste by making it into the turf used by the athletes competing in the 2014 Commonwealth Games. We are wholly committed to recycling and are delighted to be involved in this truly sustainable event.”