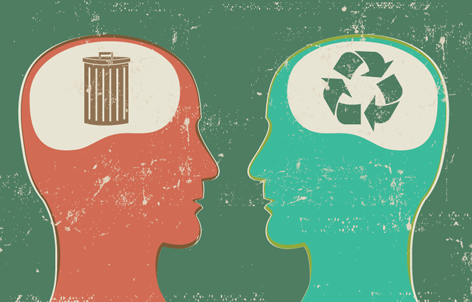 Environmental Audit Committee (EAC) says the Government “seems to have its head in the sand” after the response to its July report, Ending the Throwaway Society: Growing a Circular Economy, saw the rejection of recommendations set out.

In its report on how to create a more circular economy, the cross-party EAC called for lower VAT on recycled products, a phased-in requirement for new products to be recyclable and greater standardisation of waste collection services, including a ban on food waste being sent to landfill.

The Government conceded that it “has a role to play in developing [a circular economy]” but then goes on to reject the main substantive recommendations made by the Committee to reduce waste and increase resource productivity.

In its response, the Government says it has no plans to introduce greater standardisation in collection systems or compel councils to adopt household food waste collections.

Environmental Audit Committee Chair, Joan Walley MP – “…Our Government seems to have its head in the sand and is refusing to take basic steps to reduce the amount of food and resources we waste”

It says that differential VAT rates are too difficult to negotiate at EU level, and that it sees no “necessity at this stage” for tax allowance changes.

Environmental Audit Committee Chair, Joan Walley MP, said: “The disposable society simply isn’t sustainable in the twenty-first century. Innovative companies in the UK, like B&Q and M&S, recognise this and are already demonstrating that using resources less wastefully is the future of business. Yet our Government seems to have its head in the sand and is refusing to take basic steps to reduce the amount of food and resources we waste.”

More than a third of food waste currently goes to landfill. The MPs point out that this waste could instead be used in anaerobic digesters to produce biogas for energy or fuel and fertiliser for our farming system.

The Government argues that because VAT is governed by European law, any reliefs from VAT are strictly limited and there are no specific provisions that allow for actions to encourage the use of recyclable materials.

However, the EAC says member states are allowed to implement a reduced rate of VAT for certain goods and services and the UK has previously reduced VAT rates on new build construction materials, energy and the professional installation of energy saving products.

Walley continued: If the Government is unable to introduce differential VAT rates on recycled products under existing arrangements, Ministers should make the case for a change in the rules at an EU level as part of the discussions due to take place on the Commission’s Circular Economy proposals.”

In its report the Environmental Audit Committee called on the Government (See CIWM Journal Online story) to set out regulations to phase out products that are made from materials that cannot be recycled.

Such standards would phase out inefficient products or hard to recycle materials by ensuring that companies design products that are consistent with the circular economy, have a clear end-of-life recovery route and are fabricated using easily separable and recyclable components.

The Government has refused to introduce regulation that would establish the recyclability of all products coming on the market.

“Breaking the link between primary resource use and economic growth is essential if we want to create a truly sustainable economic system that can cope with rising global demand and population growth,” Walley concluded. “It is possible, and many businesses are showing real leadership in becoming more resource efficient. But we need the Government to create a framework where companies and consumers are rewarded for doing the right thing.

Ray Georgeson, Resource Association – “What is clear from the directness of the Government response is how little appetite their appears to be for vital policy changes needed to accelerate the circular economy and end the throwaway society – but we knew this already”

“The tax system should be used to incentivise products that are designed to have a lower environmental impact and support greater repair and re-use. Materials and products that cannot be recycled should be phased out altogether.”

Ray Georgeson, chief executive, Resource Association, said: “We commended the EAC for its important report and analysis, and share their disappointment at the response from the Government. What is clear from the directness of the Government response is how little appetite there appears to be for vital policy changes needed to accelerate the circular economy and end the throwaway society – but we knew this already.

“Like many other stakeholders in the waste and resources sector, we find this exasperating, as the potential for genuine waste reduction, resource efficiency and green growth with the carbon and jobs benefits that will accrue is still lower on the policy radar than we and many others would wish.”

“In what are now the dog days of this Government I see little point in dwelling on the limited vision and severe policy hiatus that has characterised the tenure of successive Ministers and Secretaries of State.

“Our focus now has to be on working hard as an industry to construct a consensual alternative policy framework and ensuring that all political parties understand the genuine potential of our industry as the General Election looms.

“The EAC report is one of several recent reports that would provide manifesto writers and policy developers with a good foundation for their thinking – the volume of recent output shows how hungry our industry is for policy change and how willing it will be to respond and invest further in accelerating the circular economy with strong Government leadership and an ambitious policy framework.”