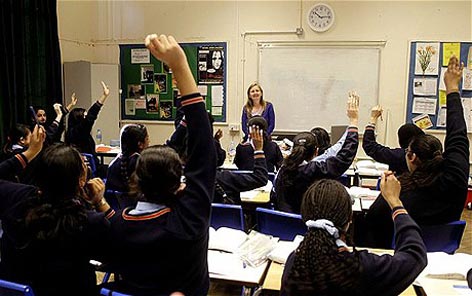 A new report published by the Global Warming Policy Foundation (GWPF) is calling for Michael Gove, the Secretary of State for Education, to institute an official inquiry into the way environmentalism is being taught in schools.

In the report, authors Andrew Montford and John Shade claims environmentalism has come to permeate school curricula across the UK, featuring in a variety of subjects, from geography to religious education to modern languages.

Passing examinations will now usually involve the ability to recite “green mantras” rather than understanding the subtle questions of science and economics involved, GWPF has said.

“There is ample evidence of unscientific statements, manipulated graphs, and activist materials used in class and even found in textbooks,” it said in a statement.

“The report also describes how activist teachers try to make children become the footsoldiers of the green movement, encouraging them to harass their schoolmates and pester their parents to bring about behaviour change,” GWPF said.

It says that the use of fear around climate change to alter children’s behaviour is having harmful consequences on children’s development, and it claims that surveys indicate that fear of the future is widespread.

The report quotes one child as saying: “I worry about [global warming] because I don’t want to die.”

Author Andrew Montford says: “The brainwashing of our children for political ends is shameful. Those responsible for education in the UK need to take action and take it quickly”.

The report states: We find instances of eco-activismbeing given a free rein within schools and at the events schools encourage their pupils to attend. In every case of concern, the slant is on scares, on raising fears, followed by the promotion of detailed guidance on how pupils should live, as well as on what they should think. In some instances, we find encouragement to create ‘little political activists’ in schools by creating a burden of responsibility for action on their part to ‘save the planet’, not least by putting pressure on their parents.”

The report is calling upon the Secretary of State for Education and his counterparts in Scotland, Wales and Northern Ireland to undertake urgent inquiries into climate change education in schools.

News in Brief | CIWM Business Partner news round up