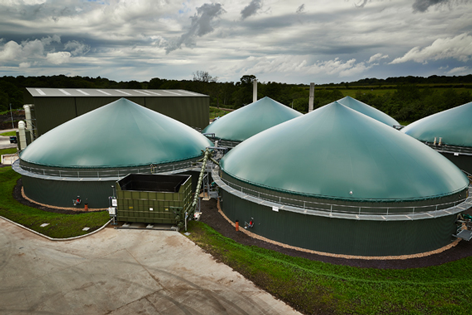 The £1.15bn allocation for the Renewable Heat Incentive (RHI) budget by 2021, announced during the Chancellor’s Spending Review statement last week, could support the construction of an additional 140 biomethane plants – a fourfold increase on current numbers and with the combined potential to heat almost 500,000 homes.

The data, released in ADBA’s latest Market Report as part of the trade body’s National Conference event, highlights how biomethane deployment is set to build upon record growth since last December, which has witnessed a quadrupling of plant numbers from 10 to 40.

If a reasonable proportion of the RHI budget is allocated to anaerobic digestion (AD), and the scheme structure is workable, then the Market Report forecasts that there could be 180 biomethane plants in operation by 2021.

“But it’s not just about energy security and carbon abatement – the additional biomethane deployment could also create around 5,000 extra construction jobs over the next five years. Nothing’s set in stone yet though – ultimately the devil’s in the detail and so we’re seeking clarification from DECC on how available funding will break down on a technology-by-technology basis.

“Our case is strong. Not only will the additional 140 biomethane plants provide a source of indigenous gas, reducing our dependence on natural gas imports from volatile parts of the world and creating thousands of manufacturing jobs, but will do so by generating value from municipal waste otherwise destined for expensive landfill, and by supporting farming resilience through improved food production and resource management.

“The growth under the new RHI settlement should only be the start. Indigenous gas from anaerobic digestion has the potential to meet as much as 30% of the UK’s domestic gas or electricity demand – or for that matter to fuel 80% of heavy goods vehicles. While the government’s commitment to RHI is welcome, delivering AD’s overall potential also needs a viable Feed-in Tariff, which means increasing ambition for the scheme and restoring crucial investor confidence by allowing pre-accreditation to recognise AD’s lengthy deployment periods.”

Given the emphasis placed on the need to decarbonise our waste treatment and farming industries if we are to meet carbon abatement targets, as outlined in last week’s fifth carbon budget report published by the Committee on Climate Change (CCC), the Government is coming under increasing pressure to pick up the pace in reducing domestic greenhouse gas emissions.

Matthew Bell – “We need a one per cent per year [reduction in carbon emissions] from agriculture to 2030…. that will require a range of measures, not least of which is anaerobic digestion”

Speaking at ADBA’s National Conference, the Committee on Climate Change’s Chief Executive, Matthew Bell, explained: “We need a one per cent per year [reduction in carbon emissions] from agriculture to 2030…. that will require a range of measures, not least of which is anaerobic digestion.”

Commenting on AD’s central role in decarbonising both the farming and waste treatment industries, Charlotte added: “AD has the potential to reduce the UK’s greenhouse gas emissions alone by 4% – that’s about £1.2 billion saved in carbon abatement costs.

“With the RHI budget commitment, AD can now deliver a third of the additional 20TWh renewable heat required by 2020 to meet the government’s 12% target.

“Aside from the avoided fossil fuel emissions borne from generating renewable energy, AD also reduces emissions from rotting manure, landfilled food waste and expensive carbon-intensive manufactured fertiliser. Taken together, ADBA calculates that these savings are worth £65 per megawatt hour in carbon abatement – a substantial contribution that establishes AD as a cost-effective technology for delivering green baseload energy for bill payers.”