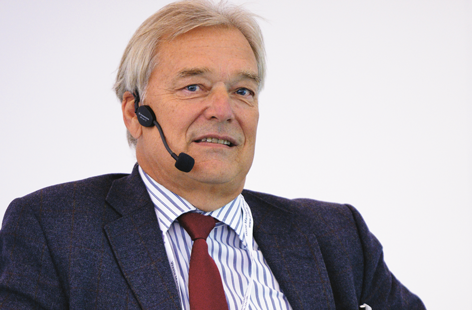 Neil Grundon, deputy chairman of Grundon Waste Management, has criticised comments made by Karl Falkenberg (above), the European Commission’s outgoing director general for environment, over the UK’s continued use of commingled waste collections.

Speaking last week (September 16) at the RWM with CIWM event, Falkenberg was quoted as saying that while the rest of Europe told him separate collections are best, the UK had a “very peculiar” approach, which resulted in lower recycling rates versus many countries on the continent.

He also hinted that the upcoming European Commission’s circular economy package would promote separate collections as the preferred collection choice.

Grundon however, has said commingled collections have many advantages and says that before criticising the UK, the Commission needs to do more to standardise waste policy across the EU, something he also says would help to reduce the amount of refuse derived fuel (RDF) exported from the UK.

Neil Grundon –“Even the interpretation of domestic, municipal and commercial waste is different, which means that when Mr Falkenberg talks about separation versus commingling, it’s very difficult to know exactly which waste streams he is driving at”

“Environmental taxation, legislation and VAT rules on waste are different across every European country, so it’s simply not a level playing field,” he said. “I would like to see the EU focus on doing more to harmonise all the taxation, opt-outs and various subsidies and then we can compare operations much more effectively.

“Even the interpretation of domestic, municipal and commercial waste is different, which means that when Mr Falkenberg talks about separation versus commingling, it’s very difficult to know exactly which waste streams he is driving at.”

Grundon continued: “Our view has always been that it is much simpler for customers to have one commingled dry recyclable collection and for the industry to invest in materials recovery facilities (MRFs), which can separate out the different waste streams quickly and efficiently.

“Although as a commercial waste collector we offer segregated collections, often customers don’t have the space for different bins, or they don’t produce the volume of materials to warrant separate collections.

“For us, it’s about giving the customers what they want and we really don’t believe segregated dry waste is a route they want to go down. Where the two do agree, however, is that the UK needs to make much more use of RDF by investing in additional energy from waste (EfW) facilities.”

Falkenberg commented that it was “more difficult to build a waste incinerator in the UK than a nuclear power plant” and called for less transportation of waste across borders in order to make the circular economy more efficient.

Grundon concurs and blames resistance from politicians concerned about public opinion against waste plants, together with a reluctance to invest in developing technologies for the lack of new EfW infrastructure.

He also says however, that the lack of consistency between EU Landfill Tax rates has a role to play.

“Bringing some semblance of order to the European market would go a long way to reducing the amount of RDF currently being exported,” he said.

“At the moment, companies are able to take advantage of different rates for different materials so they effectively play one off against the other, with the net result that waste is transported around Europe when it could be used to produce renewable energy for the home market.

“By reducing the potential for waste to be traded in this way, it might also help to persuade our politicians that RDF is a valuable resource that could actually go a long way towards helping secure the UK’s future energy supplies.”