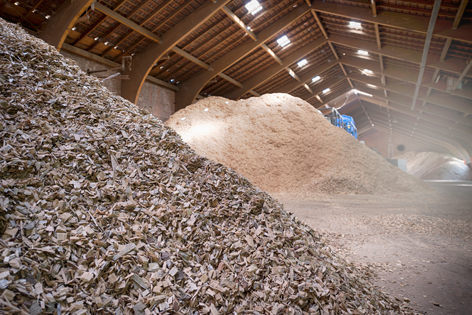 Hadfield Wood Recyclers has won a contract to supply 45,000 tonnes of biomass fuel to a new 5.4 MW wood-fuelled plant in Wrexham, North Wales.

The £25 million pound project will generate 34 GWh of green energy a year, enough to power 2,400 homes. As a combined heat and power plant it will also have the potential to provide heat to nearby manufacturing businesses.

The project is being developed by Liverpool-based Green Plan Energy and is expected to cut greenhouse gas emissions by approximately 6,000 tonnes CO2 every year – the equivalent of removing 2,800 cars from the road.

“Dual-purpose plants like Wrexham, which are capable of generating renewable electricity and heat for the benefit of local industry, play an important role in greening the UK economy. Heat isn’t just a bi-product of the electricity generation process; it is a valuable source of energy in itself.”

Vicki Hughes, Group Business Development Director for Hadfield Wood Recyclers, said she was delighted they had secured the contract to supply the fuel, which adds to the business’s growing biomass portfolio.

“We have been growing the biomass side of our business for a number of years now, to compliment our wood recycling arm which remains as strong as ever,” said Vicki.

“We have seen an increasing number of requests to supply plants here and abroad, both small and large scale, and for us the balance is always ensuring we can consistently supply a good spec of material while ensuring it is financially viable for both parties. We are really looking forward to working with everyone on this project.”

Hadfield Wood Recyclers is one of the oldest and biggest wood recyclers in the UK and operates from three sites in Manchester, Middlesbrough and Essex. It recycles 270,000 tonnes of wood waste a year into products including animal bedding for horses, poultry and dairy cattle, feedstock for panel board, arena surfaces and filter beds.

The company also recovers wood waste and manufactures it into biomass fuel for small and large scale boilers in the UK and abroad.

Hadfield supplies biomass directly and indirectly to several other UK projects including MVV at Ridham Dock in Kent, Wilton 10 (Sembcorp) in Middlesbrough and Stevenscroft at Lockerbie. It also exports to Sweden, Germany, Holland and Estonia.

The Wrexham project has secured a commitment of £25m funding from UK Green Investment Bank plc (GIB) and Equitix.

The Equitix-managed fund Energy Savings Investment (ESI), in which GIB is a cornerstone investor, is investing £12.25m in the project. An additional £12.75m of private capital has been mobilised from the parallel Equitix Energy Efficiency Fund (EEEF).

Edward Northam, Head of Investment Banking at GIB, said: “Britain’s manufacturing businesses consume huge amounts of heat every year, much of it from non-renewable sources. Dual-purpose plants like Wrexham, which are capable of generating renewable electricity and heat for the benefit of local industry, play an important role in greening the UK economy. Heat isn’t just a bi-product of the electricity generation process; it is a valuable source of energy in itself.”