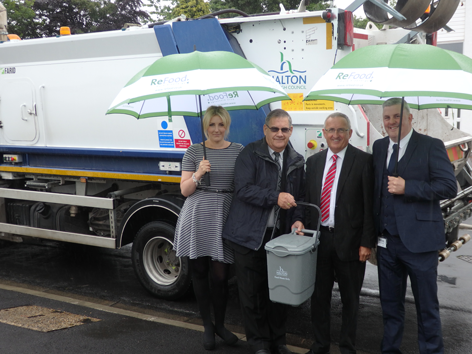 Taking place across 1,200 homes in Hale in Widnes and Heath in Runcorn, the new service will be operating for the next six months.

The Council currently spends more than £3m per year dealing with general waste and, notwithstanding the environmental benefits of recycling food, is introducing this new scheme with an aim of making a saving.

It says the cost of processing separately collected food waste is significantly cheaper than the cost of dealing with general waste collected through black bins, making recycling a highly effective alternative.

Spending less money on dealing with general waste will help to minimise the impact of budget reductions and allow the Council to maintain frontline services for the local community that may otherwise be at risk of being ceased or reduced in level, it says.

With ReFood operating a state-of-the-art food waste recycling facility in Widnes, the company is the perfect partner for Halton Borough Council. The trial will see residents recycle plate scrapings, peelings and unused food – including that still in its packaging.

ReFood then collects the waste and recycles it via anaerobic digestion – capturing the biogas produced during food waste’s natural degradation process. The gas is upgraded and fed directly to the national gas grid where it is used by consumers to heat their homes. The process also produces a nutrient-rich fertiliser, ReGrow, which is being used by local farmers to grow new crops, creating a completely sustainable food chain.

“Food waste makes up a significant part of the domestic waste stream. Not only does it contaminate materials that could otherwise be recycled, it is also very expensive to deal with when placed in the black bin and mixed with general waste.”

Councillor Stef Nelson, the Council’s Executive Board Member for the Environment said, “Food waste makes up a significant part of the domestic waste stream. Not only does it contaminate materials that could otherwise be recycled, it is also very expensive to deal with when placed in the black bin and mixed with general waste.

“The real benefit of working with local ReFood is the company’s ability to take food waste in packaging, which makes it even easier for residents to recycle it.  Every pound spent on dealing with general waste is not available to spend on more important services so it’s really important that people recycle their food waste and I would encourage all residents in the pilot areas to do so.”

If successful, in terms of participation and level of waste collected, the food waste recycling service could be extended to other homes across the Borough.

Philip Simpson, commercial director at ReFood, adds: “We’re delighted to be working with Halton Borough Council – with our plant on the doorstep, recycling local food waste and turning it in to renewable energy makes perfect sense. It’s vitally important that we keep food waste out of landfill – it is an extremely valuable resource and one that has negative environmental effects if left to rot in landfill.”