Environmental charity – and a CIWM Awards finalist for another of its communications campaigns – Hubbub has today launched a new social experiment, calling on the people of Manchester to recycle their coffee cups. 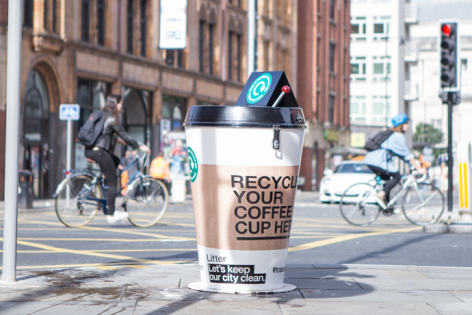 Hubbub has teamed up with coffee cup retailers and designers to reduce paper cup waste and save 20,000 cups from going to landfill by recycling them into useful new products. The campaign – #1MoreShot – kicks off the social experiment, calling on the people of Manchester to recycle their coffee cups.

It’s the first high street recycling scheme of its kind in the UK and, over three months, 11 bins in the shape of giant coffee cups are to be been placed up and down one of Manchester’s busiest streets, Oxford Road. The bins are intended to collect paper cups only, which will then be recycled.

Every year 2.5 billion ‘paper’ coffee cups are being thrown away in the UK, and it’s estimated that less than 1% are actually recycled. This new initiative will test a new way of reducing paper cup waste. The 20,000 cups collected will create 15,000 plastic flower pot holders that will be used in community gardens around the city. Hubbub has partnered with Groundwork and Manchester City Council, along with coffee retailers to redistribute the recycled products to benefit the local community and the environment.

Gavin Ellis, Co-Founder of Hubbub, said: “This new initiative will test an innovative new technology and discover whether the public will separate out their coffee cups if specialist bins are provided. We urgently need to change the way we dispose of the 2.5 billion paper cups that are thrown away every year, as currently only 1 in 400 cups are being recycled. If this is successful, it can be extended to other cities across the UK as a number of local authorities have already put their name forward.”

The campaign has also created a journey of the coffee cup info graphic, as pictured below.

On average 272,602 disposable paper cups are used every day in Manchester. Recent research shows that 81% of people in the north west say that seeing litter on the streets in their local area makes them feel angry and frustrated. Every year, it costs Manchester City Council £7.5 million to deal with litter, fly-tipping and street cleaning, which equates to £14 per person.

The product designer, Dan Dicker from ashortwalk, added: “Together with polymer experts Nextek we have spent years developing this technology, and we now hope that councils across the UK will adopt this technique as an answer to paper cup waste.  Making new products from the collected cups drives demand and allows us all the see what actually happens to our cup once we place it in the bin”.

Martin Kersh, Executive Director of the Foodservice Packaging Association, on behalf of the Paper Cup Manifesto group, said: “The paper cup recycling bins are a very welcome development and an excellent example of collaboration from the entire paper cup supply chain working together. By using these bins, Manchester residents will be showing they are as equally determined and committed as Manchester City Council in providing a long term solution to ensuring paper cups are sustainably recycled. The industry is wholly determined to find solutions and would urge other UK local authorities to follow Manchester’s lead and collaborate with us.”

The #1MoreShot campaign will run from October-December 2016. If the experiment is a success a number of local authorities have put their names forward to expand the scheme, which would mean that the giant bins will have been the catalyst for a new way to recycle.