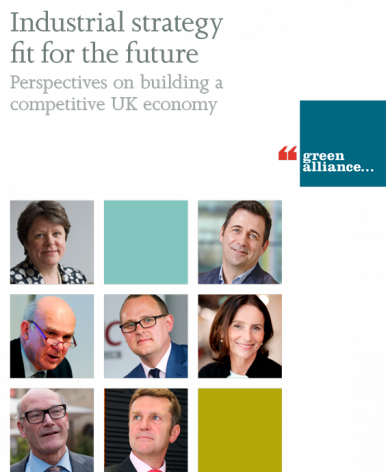 The UK’s industrial strategy MUST be low carbon and resource efficient, according to several leading business voices that have contributed to a collection of essays on the topic for the Green Alliance.

In a new collection of essays, published by Green Alliance today, seven business and policy voices, including the director general of the CBI and the deputy general secretary of the TUC, say the Government must embed low carbon development and resource efficiency in a truly modern industrial strategy; and that failure to do so risks wasting the opportunities the UK has to capitalise on the green economy.

The strong message from the publication’s contributors is that the government’s plan to boost business productivity, particularly in former industrial communities, must be aligned with UK low carbon energy and resource policies.

There is concern that the Government’s initial plans for its industrial strategy, set out in a recent green paper, do not fully recognise the way technology and growing low carbon markets, at home and abroad, are changing. The Government’s consultation on its green paper ends on 17 April.

The director general of the CBI, Carolyn Fairbairn, says in her essay that decarbonising the economy and finding opportunities for growth are “two sides of the same coin”. And as Baroness Brown highlights, the UK’s low carbon goods and services sector is already comparable to energy intensive manufacturing and is growing at four to six percent a year.

Paul Nowak of the TUC says development of new low carbon industry and expertise should be directed at creating new opportunities to replace losses in heavy industry and help to rebalance the UK economy. And the chief executive of Siemens, Juergen Maier, and the chief executive of Transport for the North, David Brown, both emphasise how the north stands to benefit significantly from low carbon, resource efficient growth.

Angela Francis, senior economist at Green Alliance, said: “We’re delighted to bring together leading voices from business, politics and academia to highlight the strong consensus that exists around putting low carbon development and resource efficiency right at the heart of the vision for a modern productive UK economy.

“The government will need to focus ruthlessly on what will give us competitive advantage in the world post-Brexit and this agenda clearly offers us huge economic opportunities, as well as providing real options for reinventing industry in the North.”

The contributing authors are:

The collection of essays, Industrial strategy fit for the future: Perspectives on building a competitive UK, is available to download here.