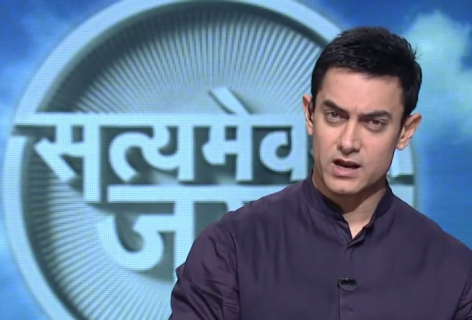 A popular issue based television show in India focused on corruption and mismanagement of the country’s waste systems. Satyamev Jayate, the show starring Bollywood star Aamir Khan, exposed the mismanagement of waste in the country in a recent episode.

The show focused on the public health problems and resources lost due to waste dumping in unsanitary landfills and burning in toxic fume-producing incinerators. The activists interviewed for the show attributed these waste-related issues to the corruption of municipal governments and the ignorance of the public to proper waste disposal.

Corruption is a rampant problem in India. The country received a score of 36/100 on the 2013 Corruption Perceptions Index created by watchdog group Transparency International (a score of 100 would have meant no corruption).

In response to the show, Indian press reported that environmental advocates in New Delhi have renewed their campaign to shut down a local incineration plant amid public health concerns. You can watch the full show (with English subtitles) here

As the search for traces of Malaysia Airlines flight MH370 continues in the Indian Ocean, investigators are encountering problems with false leads caused by marine litter.

Continually throughout the search, investigators using airplanes and satellites have spotted numerous items bearing resemblance to parts of the plane. However, when retrieved, none of the items were found to be linked to the missing plane. Instead, the objects turned out to be regular garbage in the ocean.

The findings have brought to international attention the vast amount of garbage in the Indian Ocean. The plane is suspected to have disappeared in the Indian Ocean Gyre, a circular ocean current that accumulates garbage. A major garbage patch was discovered in the gyre in 2010. This is the latest in a series of challenges in the search effort for the aircraft, which went missing on March 8 with 239 passengers and crew onboard.

US Researchers Report Plastic Bags can be Converted to Diesel

In a report released recently, researchers at the University of Illinois announced success in converting plastic bags to petroleum distillates. The researchers in Illinois built on previous experiments, which had shown that plastic could be converted to crude oil through an anaerobic heating process known as pyrolysis. The researchers took the process further and distilled the crude oil into petroleum products.

From the plastic-derived crude oil, researchers were able to produce a wide range of distillates including naphtha, gasoline and diesel. The researchers also reported success in blending the plastic-derived diesel with conventional petroleum-derived diesel, calling the two fuel types: “suitable blend components” based on the fuel properties and comparison to petrodiesel standards.

According to researchers, the process is also energy efficient and converts almost 80% of the plastic to fuel. You can read the study in full here.