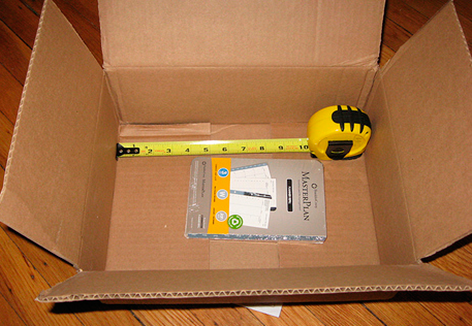 Major web mail order companies are still over-packaging items being delivered to customers, resulting in wasted materials and resources as they send out “big boxes of nothing”, according to BusinessWaste

According to research from UK-based waste management company BusinessWaste.co.uk, retailers are still sending out products in boxes that are comically large, often containing one small item surrounded by protective packing.

These deliveries not only waste materials, but also add to the fuel burden of delivery companies. More large boxes leaving warehouses mean larger numbers of lorries on the road, says British company BusinessWaste.co.uk.

Mark Hall, BusinessWaste – “Big boxes of nothing are expensive for these companies, so we don’t know why they still do it”

“We recently received a single ink cartridge in a box that was large enough to climb inside,” said BusinessWaste.co.uk spokesman Mark Hall, “If that’s not a gross waste of resources, we don’t know what is.

“Big boxes of nothing are expensive for these companies, so we don’t know why they still do it.”

Hall said that the ink cartridge incident led to BusinessWaste.co.uk making further inquiries into mail order over-packaging, and found dozens of examples where items had left warehouses in clown-size boxes.

“What we found was amazing. Our own customers told us tales of similar mail order lunacy, including a small box of screws ordered from a major tool retailer arriving in a box the size of a desk.

“Another contact nearly threw out a mobile phone because they went through miles of protective packing and couldn’t find it.”

BusinessWaste.co.uk also found websites that ask people to submit pictures of their over-packaged items, while internet free-for-all Reddit is full of discussions on the subject from both sides of the Atlantic. However, consumers, some mail order companies and the authorities are fighting back.

“We’re encouraged by the likes of Somerset County Council, whose waste partnership team investigates reports of over-packaging alongside Trading Standards. Customers shouldn’t have to put up with this waste.”

“We’re encouraged by the likes of Somerset County Council, whose waste partnership team investigates reports of over-packaging alongside Trading Standards. Customers shouldn’t have to put up with this waste”

Additionally, Hall acknowledges that major companies like Amazon are making efforts to cut down on waste packaging.

“Amazon’s book and CD mailers are spot on. They’re 100 percent recyclable, and they’re no bigger than they need to be. It’s obvious that a lot of thought has gone into them.

“They even offer customers the chance of offering ‘packing feedback’ to report instances of over-packaging, and we’re encouraged by the way they’re trying to be greener.”

However, said Hall, all you have to do is search for “Huge box Amazon” on Twitter to that the world’s largest mail order company still has work to do.