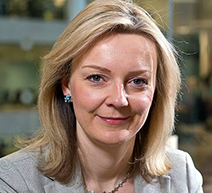 As a part of David Cameron’s Cabinet reshuffle, Owen Paterson has been replaced with Elizabeth Truss as Secretary of State for Environment, Food and Rural Affairs.

Reports from BBC Radio 5 Live’s Chief Political Correspondent, John Pienaar, earlier this morning said that Truss had been lined up to replace Owen Paterson, who has been sacked from his position.

The Prime Minister, David Cameron, confirmed Truss as Paterson’s replacement. He took to his Twitter account to Tweet: “UK Prime Minister@Number10gov Liz Truss has been appointed as Secretary of State ‪@DefraGovUK ‪#reshuffle”

Truss, 38, has been an MP since 2010 and an education minister for two years.

David Cameron is expected to unveil a new younger ministerial line-up, with a number of female Conservatives in line for promotion.

According to reports, friends of Paterson are campaigning against his being axed.

Lord Howard of Rising, said “There are 12m voters in the countryside and they will be absolutely furious if he is moved.”

Brought up in Yorkshire, Truss is the Member of Parliament for South West Norfolk. She founded the Free Enterprise Group of Conservative MPs which campaigns for economic reform and a positive attitude to profit making enterprise.

Prior to entering Parliament, Elizabeth was deputy director at the think-tank Reform, where she advocated more rigorous academic standards in schools, a greater focus on tackling serious and organised crime and urgent action to deal with Britain’s falling competitiveness.

Earlier reports in The Mirror, claimed Pickles’ is to be replaced by employment minister Esther McVey but there has been no confirmation of this as of yet.

CIWM has welcomed the appointment of Elizabeth Truss MP to the position of Secretary of State for Environment, Food and Rural Affairs.

“Defra has a critical role to play in building a more sustainable future,” says CIWM chief executive Steve Lee. “Resource efficiency and security need a champion in government and we hope to work with the new Secretary of State to ensure that the waste industry can make the maximum contribution to the development of a more circular economy. It is not just about the environment, it is about the green growth and jobs that our fast-growing and dynamic sector can bring to the table.”