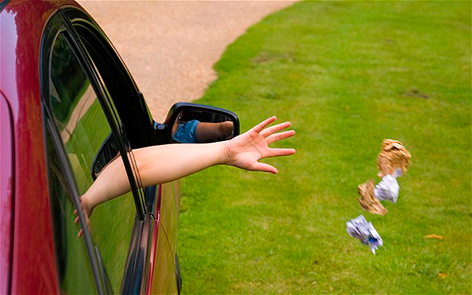 The government has accepted proposals that will make it easier to crack down on car litter by making car drivers responsible for any littering from their vehicle.

The proposals were raised by the Conservative peer Lord Marlesford as an amendment during a debate in the House of Lords on the Anti-social Behaviour, Crime and Policing Bill on 20 January. When assurances were given in the debate by Home Office minister Lord Taylor of Holbeach that the new bill would in fact include measures that would make it easier to prosecute car litterers, Lord Marlesford withdrew his amendment.

Lord Marlesford, along with Keep Britain Tidy and other groups, has been campaigning for several years to get the law changed so that councils can issue fines directly to registered owners for littering, which takes place from their vehicles.

Keep Britain Tidy, Phil Barton – “I congratulate Lord Marlesford on his tenacity and we have been pleased to support his efforts to change the law to make it easier to crack down on littering from vehicles”

At present the actual litterer has to be identified and a notice served to them – virtually impossible in moving vehicles.

Lord Marlesford said that he hoped the measure would bring about a “behaviour change” and cut cleaning costs for local authorities. He said it was time for motorists to take responsibility for their actions and those of their passengers. “It is wonderful that we are about to make a great step forward,” Lord Marlesford said after the debate.

Keep Britain Tidy chief executive, Phil Barton, was delighted to hear the news: “I congratulate Lord Marlesford on his tenacity and we have been pleased to support his efforts to change the law to make it easier to crack down on littering from vehicles. Local authorities in England already spend £1billion in street cleaning and car litter is a considerable factor in this.

“People should take responsibility for their environment, locally and further afield. Just because you are on the move is no excuse for despoiling the area you’re driving through and leaving others to deal with your thoughtlessness.

Barton continued: “We hope that the proposals raised in the debate in the House will help reduce littering from vehicles and encourage people to take their litter home with them. Keep Britain Tidy will be closely following the further passage of the Anti-social Behaviour, Crime and Policing Bill. We expect the government to amend it in line with the assurances it gave to the House and then to introduce the new measure before the next election.”

The bill has its next reading in the House of Lords on 27 January 2014.