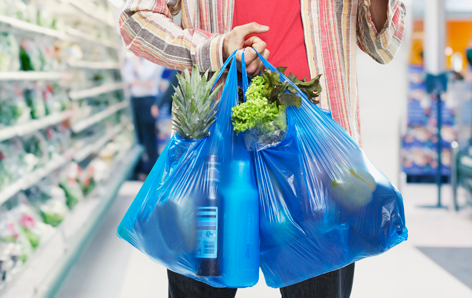 The founder of a plastic bag and film recycling plant says that there is “no good reason” why residents shouldn’t put plastic bags into their recycling for collection.

PlasRecycle’s Founder, Duncan Grierson, was interviewed live on the Today Programme on BBC Radio 4, where he spoke in response to the media coverage on the plastic carrier bag levy, which came into force yesterday (5 October).

He said that currently only 20% of local authorities actively ask residents to recycle plastic bags and films, but there is “no good reason” why they shouldn’t go into collections.

He said: “Actually polythene is totally recyclable…. Bread bags, laundry bags, multipack plastic packaging… There is really no good reason why everyone shouldn’t put their plastic bags and films into the recycling system”.

Grierson – “Actually polythene is totally recyclable…. Bread bags, laundry bags, multipack plastic packaging… There is really no good reason why everyone shouldn’t put their plastic bags and films into the recycling system”

Grierson is seeking more local authority sourced film and bags to be recycled at the Plasrecycle plant in Woolwich.

He told Radio 4 that the company receives “bales of mixed plastic films and some contamination from local authorities and waste companies”.

The plant recycles polyethylene bags and films, to produce a clean plastic granulate that is used for manufacturing new bags and other products, thus replacing virgin materials.

PlasRecycle’s first plant has been funded by an investment of £12m and is located in South East London. The plant was funded by private investment as well as two loans from public sector bodies.

As of yesterday major retailers in England will now have to charge shoppers a minimum of 5p per plastic carrier bag in an effort to reduce the amount of single-use carrier used and discarded in the country.

Retailers that employ 250 or more full-time equivalent employees are required by law to enforce the charges. Small or medium-sized business are not required to charge, but may do so voluntarily.

The initiative is aimed at reducing litter, with bags being one of the most highly visible forms of litter.

Over 8bn single-use plastic carrier bags are used by shoppers in England every year.

“This is the first government action in a decade that is specifically designed to tackle our country’s litter issue. We hope the charge will see a significant reduction in the use, and subsequent littering, of plastic bags.

“Obviously there is a lot more that needs to be done to change the behaviour of those who think it is acceptable to throw their rubbish on the floor but Monday marks a significant first step on the road to a litter-free country.”

The levy comes after WRAP statistics found that carrier bag usage had increased in England by 2.3% compared with 2013.

In Wales, where a bag charge has been in place since 2011, there has been a reduction in bag use of around 70% and in September this year announced between £17m and £22m had been donated to good causes.

Also this year, Northern Ireland announced a 70% reduction in the use of single use bags as a result of the tax implemented in 2013.

Carrier bag usage in Scotland was reduced by 147m last year, despite the charge on single use carrier bags only being in place for the last 11 weeks of the year.

In Scotland, bag usage dropped from 193.5m in the fourth quarter of 2013 to 64.6m during the same period in 2014, suggesting that Scotland is well on track to achieve a reduction of more than 80 per cent in the use of single-use carrier bags.

The country raised £1m for good causes in just six months through the levy.