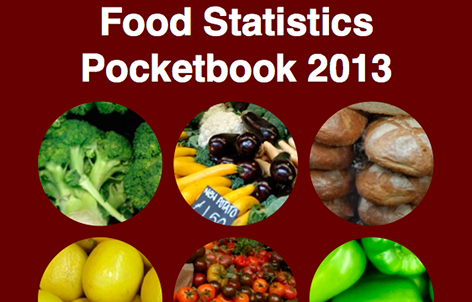 Defra has published its Food Statistics Pocket Book 2013, which looks at the state of the UK’s food waste, estimating that around 15m tonnes of food is wasted per year, with households generating 7.2m tonnes per year of which 4.4m tonnes is avoidable.

The Food Statistics Pocket Book 2013 looks at food and drink waste through the UK food chain and has estimated that 4.4m tonnes of food that is waste is actually fit to eat.

The report says that WRAP estimates a 1.1m tonnes reduction of food waste between 2006 and 2010, although it says more work is needed to reconcile estimates of purchases, consumption and waste.

The hospitality sector disposed of around 600,000 tonnes of food waste to landfill in 2009, of which almost 400,000 tonnes was avoidable.

Estimates are based on peer-reviewed studies and Defra said that accuracy varies, with some being indicative only.

Avoidable food and drink waste in the home is estimated by WRAP at £12bn per year or £480 per household. “Not used in time” is often cited as the reason for throwing away food. Bread is the most wasted food with 32 percent of edible purchases being wasted. Bread crusts were not classed as edible in this analysis.

Waste going to landfill from the UK hospitality sector in 2009 is estimated at 1.5m tonnes, which includes 600 thousand tonnes10 of food waste (41 percent). The majority of this, 400 thousand tonnes, Defra said, is avoidable.

Why Is Food Wasted?

A large proportion of meal-leavers tend to leave food when eating out in pubs, hotels or restaurants than other venues, according to the study. The tendency to leave food at these venues could be that these diners attach more value to enjoying a meal out in a social setting than diners who are simply out to “re-fuel”.

The research showed that customers take into account how much the meal cost before deciding whether to leave food and what part of the meal to leave.

Local authorities in the UK collected 315,218 tonnes of separately collected food waste for recycling from households in 2012, a 29 percent increase on 2011.

According to the pocket book, 33 percent of consumers cited “food waste” as a bigger concern than 16 percent who were concerned with “the way foods are packaged”.