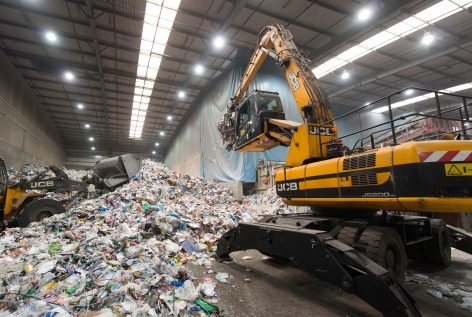 Since England’s 5p charge came into practice in October last year, plastic bags collected by Veolia have reduced from an estimated 170m to 40m, the company says.

Richard Kirkman, Technical Director at Veolia UK and Ireland, said: “In just 365 days we’ve seen a huge drop in carrier bags coming through our facilities. In fact, plastic bags collected by Veolia have reduced from an estimated 170 million to 40 million, since the 5p charge came into practice last October – that’s a huge 75% reduction. This is a great achievement and something we, as a nation, should be very proud of.”

Veolia is now turning the carrier bags it does receive into new refuse sacks. Through its Bag2Bag scheme, launched in Southwark, it’s able to recycle the low density film – the main material in single use bags – back into single use refuse sacks that are then distributed back to Southwark residents.

“This is a great illustration of the shared contribution Veolia and the residents of Southwark make to the circular economy,” Kirkman said. “We’re hoping to roll it out to other local authorities because if this was translated across the country we would save about 6.2bn bags. This is equal to 15,000 tonnes of material and 15,000 tonnes of carbon emissions, helping out in the battle against climate change.

He says, however, that carrier bags are just the “tip of the iceberg”.

“Our new facility in Dagenham is able to regenerate all the plastic milk bottles in London into food grade pellets to make new bottles. This is a huge step in the right direction and will double the UK’s recovery capabilities of high density plastic recycling. By reusing plastic, Veolia is closing the loop on a valuable resource and makes it possible to avoid pollution that is difficult to eliminate.”