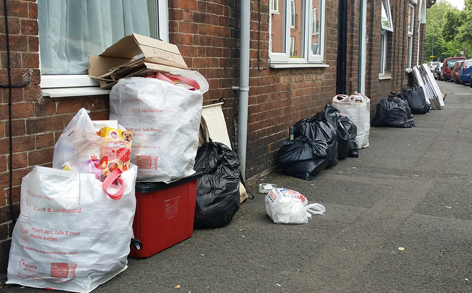 Conflicting opinions in the debate over future UK recycling rates are clouding the issues of what is realistically achievable and how challenging targets could be met, claims resource recovery specialist, Axion Consulting.

Commenting on industry concerns that England may miss its 50 percent by 2020 recycling target, Keith Freegard, director of Axion Consulting, suggests a radical rethink is needed in the sector if kerbside recycling rates are to be improved.

“There is much contrasting discussion, yet what’s needed is fundamental change if we are to maximise recycling rates,” he says. “The proposed EU rate for 2030 of 70 percent recycling and nil to landfill is certainly ambitious, but how are we going to get there? The focus should be on what rate is possible – and crucially, what is achievable?”

Currently, a local authority recycling rate is measured by the amount of waste collected from the kerbside. Keith suggests this should be measured in an entirely different way by taking into account the efficiencies at each stage of the process. “The approach would be based on actual levels of materials recycled, not collected,” he suggests.

“Recycling is a multi-stage process starting in UK households and including kerbside collection, MRF sorting, re-processing and eventually back into re-manufacturing. In my view, material recovery efficiency is critical at all stages right through from the ‘urban miners’ or householders putting materials out for collection, to the MRFs sorting the comingled material through to producing the final product.

“This applies whether it is a plastic bottle or newspaper and provides a more accurate assessment of how much household waste is actually recycled and diverted from landfill.”

Taking this “process chain” of individual efficiencies and assuming the maximum possible efficiency that each step could achieve given optimal performance, the possible product recycling figure is 56 percent (as measured at the output of the product reprocessor).

“The diagram shows the multiple-stages involved in reaching this figure and it also indicates that the “kerbside recycling” value, as currently measured would be a maximum of 69 percent using these assumptions. This helps to explain why the UK is starting to flat-line at around 50 percent, says Keith.

However, when using the same process-steps model based upon actual recycling rates achieved by top performing LAs, the “product recycling” figure is just 35 percent. This assumes a best-in-class UK performance at all the stages, which equates to a “kerbside recycling” rate of 50 percent when measured as material collected for input to a MRF.

“Based on our numbers, I would suggest that a 50 percent recycling rate measured at the kerbside is about as good as we’re going to get unless we change something really significantly”

“Based on our numbers, I would suggest that a 50 percent recycling rate measured at the kerbside is about as good as we’re going to get unless we change something really significantly,” Keith continues.

The largest efficiency losses in the process occur within the household when the “urban miners” are the critical operators in terms of extracting recyclable packaging items from the “black-bag” waste bin and placing them correctly into the “recycling” stream. Low rates of participation, poor identification and capture of some types of packaging and a general lack of willingness to ‘do recycling’ are all contributors to huge losses of materials at this stage.

The revised Waste Framework Directive states that local authorities must have separate collections of dry recyclables in place by January 2015, unless it is not “technically, environmentally and economically practicable” (TEEP) for them to do so or appropriate to produce high quality recycling.

While acknowledging that any solutions would need to work within the requirements of TEEP, Keith argues that a fundamental change of approach is needed to meet future challenges rather than “doing more of the same that we’ve been doing for the last ten years.”

Possible strategies could include simplifying recycling for householders by changing to a negative sort; this is where all dry, non-food waste goes into one main bin (for example glass, plastic, and metal packaging, newspapers, cardboard), food waste in a separate bin for composting or AD and the remaining truly “non-recyclables” (eg, personal care & sanitary products) put in a small black bag for energy from waste.

Packaging should be re-designed with simpler materials to make recycling easier and clearly labelled to instruct and inform the urban disposer, he suggests. While stronger legislation would encourage and reward companies who use high levels of recycled content in new goods, providing financial incentives for those who demonstrate they are taking action.

Keith adds: “We should be rewarding best performers all along the chain, such as best quality household waste providers, best waste reduction areas and best MRF sorting systems. There should also be rigorous policing of non-participants in recycling schemes. Perhaps our biggest challenge of all will be implementing a strategy for change.”