20 people have been evacuated from their homes after a fire broke out a recycling site in Wardley Industrial Estate near Swinton, Greater Manchester yesterday (7 May). 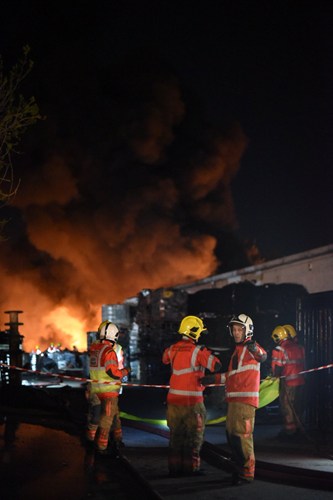 The fire is believed to involve a large quantity of recycled computer parts in an industrial sized container, according to Greater Manchester Fire and Rescue Service.

20 people have been evacuated from their homes following damage caused by a downed power cable.

Residents have been given temporary accommodation by the local Emergency Planning Officer.

The cable has also affected the train line between Manchester and Wigan, which will be closed off until further notice.

Power lines have fallen between Moor Side and Walkden stations.

A GMP spokesperson said: “At 11.23pm police attended a large fire at a recycling plant to assist the fire brigade. The fire is believed to be contained although it will continue to be fought overnight. A number of people have been evacuated from their homes.”

Group Manager Paul Starling said at the incident yesterday: “We currently have four jets and two hand held hoses in operation to tackle the fire. The large smoke plume the recycled material produces is causing some local residents concern, but we would like to reassure you that we are dealing with the incident well.

“You can avoid any smoke by simply closing windows and doors and avoiding the area until further notice”.

At its peak there were eight fire engines at the scene, but this has since been scaled down to six.

An investigation into the cause will take place once the area is safe.