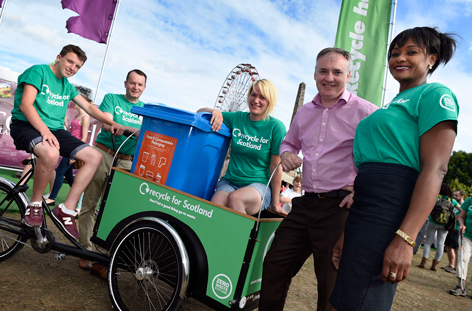 Zero Waste Scotland worked in partnership with Festival 2014, which ran alongside the Commonwealth Games,  to recruit over 80 recycling ambassadors to help the huge crowds flocking to sites across Glasgow to separate their waste to ensure as much as possible can be recycled.

The recycling ambassadors were stationed at recycling points at the Glasgow Green Live Zone and Kelvingrove Bandstand sites, which are hosting a wide range of music, arts and sporting events alongside the Commonwealth Games.

Volunteers aided visitors to separate paper, card, plastic, food waste and compostable packaging from general waste, so that the right things go in the right bins to maximise the amount that can be recycled.

The volunteers came from a wide range of backgrounds, with students, retirees, staff from Zero Waste Scotland and waste managers Viridor and members of the public, all keen to be part of the festivities in Glasgow and to help make the events as sustainable as possible.

Cabinet Secretary for the Environment Richard Lochhead – “Sorting our waste for recycling helps to realise its value, making our economy more circular. The Recycling Ambassadors are doing an excellent job and I’d like to thank them for giving up their own time to help make Glasgow 2014 as sustainable as possible”

Zero Waste Scotland supports householders, businesses and local authorities to increase recycling on behalf of the Scottish Government. Cabinet Secretary for the Environment Richard Lochhead visited the Glasgow Green site to meet the volunteers and thank them for their efforts.

Cabinet Secretary for the Environment Richard Lochhead said: “With these volunteers on hand to champion recycling it’s never been easier to do the right thing and put waste into the correct bin. Recycling helps avoid burying waste in landfill, where it can release harmful greenhouse gases. Sorting our waste for recycling helps to realise its value, making our economy more circular. The Recycling Ambassadors are doing an excellent job and I’d like to thank them for giving up their own time to help make Glasgow 2014 as sustainable as possible.”

Iain Gulland, Director of Zero Waste Scotland said: “We’ve had an amazing response to our call for volunteers, and those who are volunteering are making a big difference by helping visitors to Festival 2014 recycle as much as possible. Zero Waste Scotland has been working closely with both Glasgow 2014 and Festival 2014 behind the scenes to ensure the events are as sustainable as possible, and this is a great way to get the public involved and help them play their part in creating a green Games.”