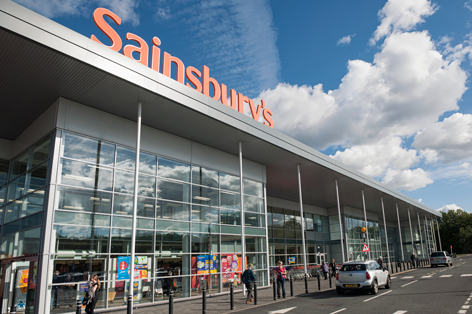 Ten Sainsbury’s supermarkets across the country are now powered by green gas generated from its own food waste – and a further six are in the pipeline.

Produced entirely from waste food, the energy generated over the past year alone is enough to power 5,000 homes, the supermarket chain says. This equates to 10% of Sainsbury’s entire national gas consumption for the year.

In partnership with food waste recycler, ReFood, food waste is collected from Sainsbury’s’ two depots in Sherburn-in-Elmet and Haydock, before being converted into gas, heat and fertiliser at ReFood’s anaerobic digestion (AD) processing facilities.

Paul Crewe, head of sustainability for Sainsbury’s – “We do everything in our power to ensure that we do not have food waste in our operation. It’s not commercially viable to overproduce food, knowing that its going to be wasted”

The green gas is then exported to the national gas grid by ReFood and, through a third party, is imported by Sainsbury’s stores nationwide – being used to generate carbon-neutral electricity for power and heating.

The agreement is one of the largest of its kind in the UK, seeing ReFood supplying both green gas and supporting certification.

ReFood has supplied the retailer with almost 50m KWh of biomethane gas to date.

As a result of the partnership, ten stores have already significantly increased their use of renewable energy, while lowering utility bills. Speaking to CIWM Journal Online, Paul Crewe, head of sustainability for Sainsbury’s revealed that a further six stores are set to also use power generated from its food waste.

The partnership also helps to deliver Sainsbury’s commitment to send zero operational waste to landfill – which it currently does – by finding a use for inedible waste products. All surplus edible food is donated to local charity partners.

“We have significant processes within Sainsbury’s operations to ensure that food waste is not generated in the first place,” Paul said, “including systems, processes and employees that monitor products.

“We do everything in our power to ensure that we do not have food waste in our operation. It’s not commercially viable to overproduce food, knowing that its going to be wasted, so we work stringently with our control systems and our supply chains make sure we get the right product at the right time.”

However, despite Sainsbury’s efforts, Paul says that food waste within the supermarket chain is “inevitable”. He points to external factors as one reason for this, such as the weather and temperature, which might boost sales of one type of product – such as burgers for BBQs, for example – and leave a surplus of others.

“We still go through the same hierarchy of process of making sure where ever possible we can discount that product for sale,” he said, “but ultimately there will be product that is left.”

Speaking about the process, Philip Simpson, commercial director at ReFood, ensured that there’s no “green washing” going on.

He said: “The National Grid has exceptionally high standards on quality in terms of energy content, moisture, contaminants, all sorts of criteria we have to meet. We go through an aggregator to inject into the grid – we don’t have a transmission license – so we have to go through a third party.

A bio-fertiliser by-product, which is formed from the process, has reached PAS110, and ReFood are working closely with the farming industry, looking to go beyond.

Speaking about what a high-profile project like this will do for the AD industry in the UK, Philip says it underlines the advantage of implementing a landfill ban on food waste.

He said: “It highlights the benefits that can be achieved to move on beyond the initial objective of zero landfill. We met that objective, working with Sainsbury’s, many years ago… it’s moving to that next step.

“It’s not just diverting from landfill, it’s supplying gas back, and then using that gas in a way that’s most energy efficient in the stores. So it’s highlighting the benefit of what we’re asking for with a food waste landfill ban.