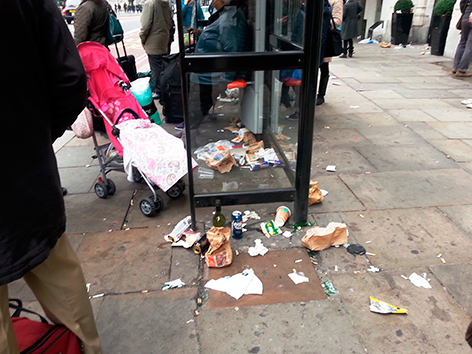 To highlight the amount of rubbish Londoners leave behind, a busy street in the City of London – which an army of street sweepers normally cleans – was left alone last weekend [16-17 November].

Visitors to Bishopsgate in the Square Mile were left to wade through a mountain of discarded food, packaging and other litter dropped on Friday and Saturday nights.

Under normal conditions the area would have been cleaned manually at least eight times during the day and twice using mechanical sweepers at night.

The City of London is famous for being the world’s leading international financial centre, and its streets are used by 350,000 commuters every day.

The City of London Corporation and 24 local authorities took part in the nationwide campaign, entitled ‘Which Side of the Fence?’, in partnership with Keep Britain Tidy.

When the City Corporation’s street cleaners rolled in at 3pm on the Sunday, they collected over 25 kilogrammes of rubbish.

The social experiment is hoped to reveal the extent of the London’s littering behaviour, and the City of London Corporation’s Assistant Cleansing Director, Jim Graham, said: “We aim to meet and exceed the high standards people expect of our waste and cleansing services – whether they visit, live or work in the City. But every one of us has a responsibility not to drop litter and to help keep our capital tidy.”

To prove its credentials, the City Of London has entered the CIWM Clean Britain Awards 2014, which is now in its 25th year.

The City Of London has a cleansing service that covers every inch of the Square mile every day, along with specialised crews and equipment dedicated to the particular challenges faced. It takes street cleansing seriously by utilising: