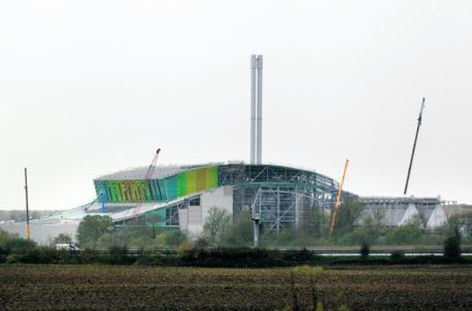 Cherwell District Council has applied for a £144,000 Government grant to carry out a feasibilty study into using steam from Ardley energy from waste plant to heat 6,000 homes and businesses in Bicester.

The plant processes up to 300,000 tonnes of non-recyclable waste and generates enough electricity for the National Grid to power more than 38,000 homes, however, as it stands the plants location means its excess steam cannot be used.

However, plans for an “eco town” to be built two miles from the Ardley plant means the council is looking into whether the steam could be piped into to the town heat homes and potentially businesses.

If the grant is approved, the research would take about 18 months, according to the council.

“The Ardley waste plant will produce heat as a by-product that is not needed and therefore could potentially be used to provide heating for nearby buildings,” a council spokesman said.

“The council is interested to exploring if there would be advantages in the use of this heat in NW Bicester and other locations in the town.”

NW Bicester project director Steve Hornblow, of eco town developer A2Dominion, said: “When Ardley is commissioned, there will be large amounts of waste heat that can either be dumped, or maybe someone can make use of that heat.

“NW Bicester are the closest potential users but we are looking at whether it could be possible to pipe the heat to other parts of the town.

“If it is possible to make use of that heat, it means we won’t have to burn fossil fuel gas so it is a better environmental option.

“At this stage we don’t know if it would be commercially viable.

“Our consultant team is analysing the options and once we have concluded upon the most appropriate we will approach the major utility companies.

“We are considering this among a number of other options and once these are finessed we will move forward the most appropriate solution.”