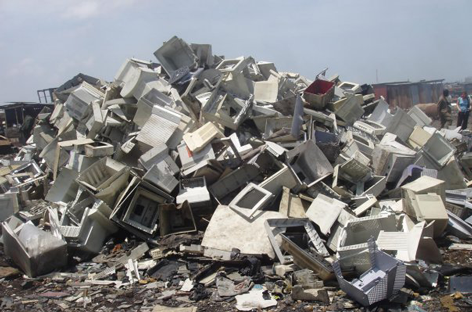 16 out of 50 leading companies (31 multinational and 19 national) examined in a study by Indian-based environmental research and advocacy organisation, Toxic Link, were found to be “wanting in their role on e-waste management” and fared very poorly.

The companies whose e-waste management was found “wanting” include some of the top global brands such as Akai, BPL Group, Blackberry and HCL.

Other globally acclaimed companies such as Apple, Hitachi, Phillips, and Samsung barely managed to scrape through and fell into “not so good performance” category.

Ravi Agarwal, Toxics Lin k – “E-waste management is one of the most pressing issues in India right now, and it is highly distressing to know that some of the reputed companies openly ignore their responsibilities”

The study examines if the two most important stakeholders – producers and the regulatory agencies – State Pollution Control Boards/Committees (SPCBs/Cs), have been effective in fulfilling their roles defined under the e-waste (Management and Handling) Rules, 2011.

The study reveals that 16 brands, including some leading mobile phone companies, have not set up any take-back system even after two years of the rules coming into effect.

“The take-back mechanism – which is a system to collect e-waste from the consumers, is blatantly ignored by a number of companies; one third of the brands assessed had no take-back mechanism at all, and more than half of them did not provide any information on physical collection points,” says Priti Mahesh, chief programme coordinator, Toxics Link.

Not a single brand has made any serious efforts to create awareness among its customers, the organisation says.

The volume of e-waste is growing at an alarming rate. Current estimate projects 2.7m tons of e-waste generated annually in India; and UNEP report suggests it will go up 500 times by 2030.

“E-waste management is one of the most pressing issues in India right now, and it is highly distressing to know that some of the reputed companies openly ignore their responsibilities,” says Ravi Agarwal, director, Toxics Link.

The report also noted the huge gap in e-waste compliance between India and the rest of the world. “Most top companies have a global policy on waste management and demonstrate responsible behaviour by setting up efficient systems in most parts of the world. In India, however, the same companies follow a totally different yardstick, which leaves much to be desired,” says Satish Sinha, associate director, Toxics Link.

“We hope the scathing findings of the report serve as an eye opener to the top management of companies and senior officials of PCBs. Both need to wake up and begin fulfilling their responsibilities under the Rules,” says Agarwal.