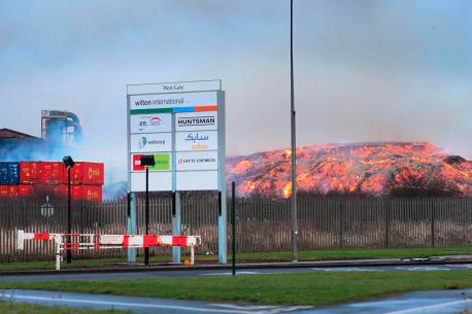 UK Wood Recycling has been fined £72,000 following a blaze that tore through its Wilton site, near Redcar, between December 2013 and January 2014.

The fire involved 16,000 tonnes of waste wood stored at the site for recycling.

Environment Agency raised concerns over storage breaches that made spontaneous combustion of thousands of tonnes of wood “highly likely”.

“During this investigation, the company was given repeated opportunities to comply with regulatory guidance and the advice of the local fire brigade but chose to disregard this, once again building up large volumes of wood and putting profit before human health and the environment”

UK Wood Recycling previously denied any safety breaches but in court admitted that between April and September 2014, a deadline to reduce increasing sizes of wood piles was not met.

The firm was charged with keeping controlled waste in a manner likely to cause pollution or harm to human health between April and September 2014.

Judge Crowson fined the company £72,000 and ordered they pay £71,335 in court costs. He said, however, that since 2014, the firm had shown a commitment to improving fire prevention on site and that before 2013 there were few criticisms of the company’s operations.

“During this investigation, the company was given repeated opportunities to comply with regulatory guidance and the advice of the local fire brigade but chose to disregard this, once again building up large volumes of wood and putting profit before human health and the environment.

“We are working together with the company to find a way they can operate as a profitable business while taking fire prevention and environmental concerns into account.

“The company has invested considerable funds on the site and we continue to work with them to find a satisfactory way forward.”

Vicki Hughes, group business development director at UK Wood Recycling, said: “We are very disappointed to have found ourselves in this position because we are a company that strives to operate to the safest and highest standards at all times.

“The charge refers to a period from April to September 2014, during which time we were in discussions with the Environment Agency regarding fire prevention plan guidance over stack sizes permitted on waste wood sites. The guidance at the time was TGN7.01, which was being disputed by the industry generally as it was felt it was impossible to comply with.

“Since 2014 the fire prevention plan guidance has undergone further changes and we continue to work closely with the Environment Agency to ensure all possible risks are minimised.”

“Although we admit that we were not complying with TGN7.01 during that time, we were not storing material outside the limits of our agreed permit and the wood was stored in much smaller stacks than at the time of our earlier fire.

“Furthermore, the judge acknowledged there was no regulatory breach at the time of the fire in 2013, and recognised the efforts, investment and procedures we have put in place since 2014, specifically noting the investment we have made in preventative technology to help monitor our site for any potential incidents.

“Since 2014 the fire prevention plan guidance has undergone further changes and we continue to work closely with the Environment Agency to ensure all possible risks are minimised.”

Message from waste sector to public: “We’re working hard to maintain your services”