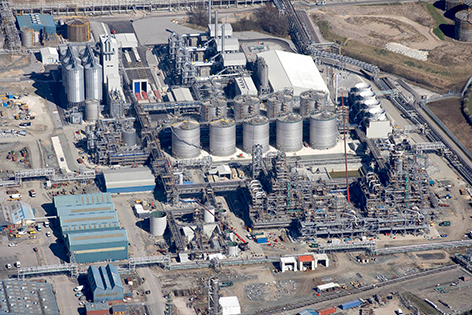 As European Parliament is preparing to vote on proposals to reduce EU renewable transport targets, a £350m Vivergo bioethanol plant in Hull has been officially opened, which is the UK’s largest and is set to produce 420m litres of renewable transport fuel every year.

The Vivergo plant, a joint venture between AB Sugar, BP, and DuPont, will produce 420m litres of bioethanol a year at full capacity, equivalent to a third of the UK’s current demand.

As well as producing 420m litres of renewable transport fuel every year, the plant’s development has created and supported over 1,000 jobs, and will result in 80 full time, highly skilled jobs at the site.

Business Secretary, Vince Cable – “Vivergo is a good example of how joint ventures, using the financial support and expertise of big companies, can not only create local jobs but also help meet the energy security and fuel demands of our country”

Business Secretary, Vince Cable, who opened the plant said: “Energy is critical for the UK’s growth prospects. As part of the Government’s industrial strategy we are working closely with industry, including the energy sector, on long term plans to develop stronger supply chains, encourage future billions of investment, secure thousands of jobs, support skills and research and development.

“Vivergo is a good example of how joint ventures, using the financial support and expertise of big companies, can not only create local jobs but also help meet the energy security and fuel demands of our country and support local farmers.”

The Vivergo plant is a brownfield re-development project built on a 25 acre site within the Saltend Chemicals Park near Hull. Now operational, the plant employs around 80 full time highly skilled people and is estimated to support over a thousand additional jobs through its supply chain.

James C. Collins, president of DuPont Industrial Biosciences said: “While the demand for transportation energy will continue to grow, the supply of affordable petroleum will not. To meet the needs of a growing population, we need to use existing resources more effectively and find better ways to harness renewable energy sources, like those that come from agriculture.”

REA head of renewable transport, Clare Wenner, welcomed the opening of the plant. She said: “This is a very exciting day for the UK green economy. The biofuels developed here in the UK are among the most sustainable in the world in terms of greenhouse gas savings. Vivergo is a fantastic exemplar for the industry, not just for their commitment to producing sustainable fuel and food, but also for their commitment to developing the skills and manufacturing base here in the UK.”

The news of the Vivergo plant comes as the European Parliament Environment Committee (ENVI) is preparing to vote this Thursday on proposals to reduce EU renewable transport targets, on the grounds that greenhouse gases may be released indirectly as a result of land that is currently not cultivated coming into production – a phenomenon known n as indirect land use change (ILUC).

Clare Wenner, REA – “The science of ILUC is too uncertain to introduce theoretical ‘ILUC factors’ – and it certainly cannot be used to justify calling into question major investments in our jobs and our industry”

The original proposals recommended an immediate limit to the contribution of crop-based biofuels to EU transport energy at five percent and the incorporation of ILUC factors into greenhouse gas calculations to account for notional additional emissions.

However, the Industry, Research and Energy Committee (ITRE), who is jointly leading on this issue with ENVI in the European Parliament, voted recently in favour of a specific 2020 advanced biofuels target and a 6.5 percent crop-based biofuels cap, and against the incorporation of controversial ILUC factors.

Clare Wenner commented: “The science of ILUC is too uncertain to introduce theoretical ‘ILUC factors’ – and it certainly cannot be used to justify calling into question major investments in our jobs and our industry. Calculating the correct factors is both impossible to do accurately, as it involves heroic assumptions about future land use changes, and also imposes an unfair penalty on biofuel developers, who are not the direct cause of the problem.

“No other land using industry is being forced to account for ILUC, and biofuels, which are the only viable way of significantly reducing greenhouse gas emissions from our transport, should not be used as a guinea pig for ILUC accounting. Singling out crop-based biofuels would ultimately be counter-productive, as the biofuels market has been a great stimulus for investment in agriculture, which is critical if the world is to feed a growing population.

“Improving agricultural practices and productivity for all land-using industries is the only reasonable way to resolve the ILUC issue. We hope therefore that the ENVI Committee takes the recommendations of the ITRE Committee very seriously when the vote is taken on Thursday.”