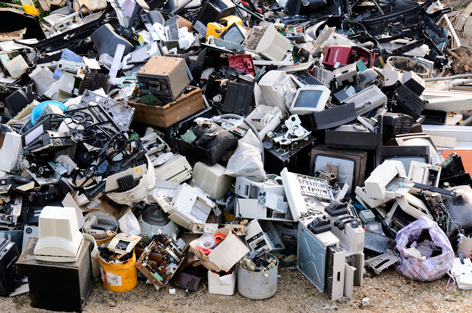 Up to 90% of the world’s electronic waste, worth nearly US $19bn, is illegally traded or dumped each year, according to a report released by the United Nations Environment Programme (UNEP).

Each year, the electronic industry – one of the world’s largest and fastest growing – generates up to 41m tonnes of e-waste from goods such as computers and smart phones, which forecasts say may reach 50m tonnes already by 2017.

60-90% of this waste is illegally traded or dumped, according to UNEP’s “Waste Crimes, Waste Risks: Gaps and Challenges In the Waste Sector”.

UN Under-Secretary-General, Achim Steiner – “We are witnessing an unprecedented amount of electronic waste rolling out over the world. Not only does it account for a large portion of the world’s non-recycled »waste mountain«, but it also poses a growing threat to human health and the environment, due to the hazardous elements it contains”

The International Criminal Police Organisation (INTERPOL) estimates the price of a tonne of e-waste at around US $500. Following this calculation, the value of unregistered and informally handled, including illegally traded and dumped e-waste ranges from US $12.5 to US $18.8bn annually.

The report has made a number of recommendations for countries, which include:

UN Under-Secretary-General and Executive Director of UNEP, Achim Steiner said: “We are witnessing an unprecedented amount of electronic waste rolling out over the world. Not only does it account for a large portion of the world’s non-recycled »waste mountain«, but it also poses a growing threat to human health and the environment, due to the hazardous elements it contains.”

“Through enhanced international cooperation and legislative coherence, stronger national regulations and enforcement, as well as greater awareness and robust prevention measures we can ensure that the illegal trade and dumping of e-waste is brought to an end. This will create a win-win situation, whereby rare and expensive elements are safely recycled and reused, boosting the formal economy, depriving criminals of income and reducing health risks to the public,” he added.

Innovative solutions to combat illegal and unsustainable handling of e-waste are emerging, according to the UN. Recovering valuable metals and other resources locked inside electronic products, for example, can reduce the amount of e-waste produced, diminishing pressure on the environment, creating jobs and generating income.

The growing volumes of e-waste, municipal waste, food waste, discarded chemicals and counterfeit pesticides, all contribute to increasing pressure on the environment. The report also points to the fact that every year, roughly one third of the food produced for human consumption globally – approximately 1.3bn tonnes, worth over US $1tr – is lost or wasted.

The global waste market – from collection to recycling – is estimated to be worth US $410bn a year, generating jobs and incomes. As with any large economic sector, it creates opportunities for illegal activities at various stages of the waste chain. Concentrated on making profit, operators are prone to ignore waste regulations and expose workers to toxic chemicals. On a larger scale, organised crime may engage in tax fraud and money laundering, as volumes handled go largely unregistered, allowing for substantial under and overreporting.

Currently, Europe and North America are the largest producers of e-waste, though Asia’s cities are catching-up quickly.