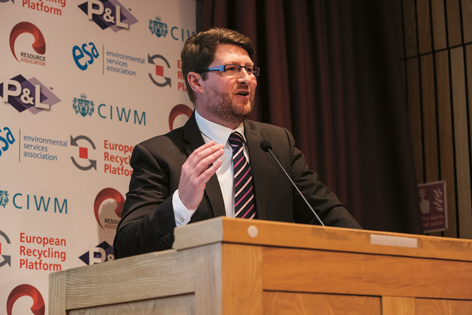 After ten years in Kent, and eight years as the Kent Resource Partnership’s (KRP) manager, Paul Vanston is leaving KRP in February 2016 after accepting the post of head of waste resources of the joint recycling/waste services of South Cambridgeshire District Council and Cambridge City Council.

The employing authority is South Cambridgeshire DC and Paul will begin in the poat on 15 February 2016.

“I have had a terrific decade in Kent working with fantastic councillors and colleagues across all 13 Kent councils,” he said. “Partnership working has delivered higher performance at better cost to taxpayers. The great news is the KRP has the potential to do so much more. For my successor, the KRP will be an opportunity to make their own mark on how the future looks on behalf of 1.6 million residents generating some 700,000 tonnes of resources a year.”

Speaking about his new role for South Cambridgeshire DC and Cambridge City Council, Paul said: “These two Cambridgeshire councils are definitely going places. Along with Kent, they are setting a great example in joining-up services in the most challenging of financial climates. It’s my privilege to be asked to join them and lead the new shared service.”

Paul Vanston – “These two Cambridgeshire councils are definitely going places. Along with Kent, they are setting a great example in joining-up services in the most challenging of financial climates. It’s my privilege to be asked to join them and lead the new shared service.”

“He has delivered the ambitions of all of Kent’s councils to make the unique Kent Resource Partnership one of the most respected waste partnerships in the country,” he said. “Paul will be a huge asset for Cambridge City and South Cambridgeshire, but above all, I have no doubt he will remain a fantastic ambassador for public services, and specifically for local government, with all our partners in recycling and waste across many sectors.”

Cllr Mick Martin, Environmental Services Portfolio Holder for South Cambridgeshire DC, and Cllr Peter Roberts, Executive Councillor for Environment and Waste for Cambridge City Council commented: “We are really excited to have Paul lead the fledgling shared waste service. Paul brings a great deal of experience and strategic knowledge, and we believe he is the right person to help our service evolve over the coming years. Combined, Cambridge and South Cambridgeshire, represent one of the largest areas of future employment and housing growth in the UK, so it only makes sense for both councils to work together with tested and dynamic public servants, like Paul, at the helm.”